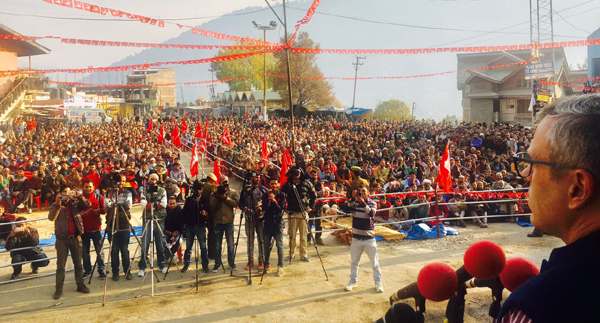 “ Nothing could be more  absurd than this,” Omar who also is  working president of the main opposition National, Conference  told a huge gathering  here . This place had also observed shutdowns and witnessed   stone pelting incidents during the days of current unrest in the Valley that lies adjacent to  north of this mountainous district.

Omar Abdullah said the youth did not die for Rs 500 or Rs 1000 notes. “Instead of continuing to invest in delusions and deflections, there is need to understand real issues so that a solution can be worked out”, he added.

“For arriving at a solution, New Delhi must open channels of dialogue with all the stakeholders”, he said

The Working President referred to the alarming Kashmir situation of the past over four months and said: “ The issues involved are beyond economics or law and law and order and therefore New Delhi must take political initiatives for resolving these”. He expressed profound grief and sorrow over the deaths of young men and women in the unrest and said the contradictions and opportunism of the PDP-BJP alliance was at the root of turmoil in the Valley.

While giving an overview of the current political situation across the State,  Omar Abdullah cautioned people against divisive politics being penetrated into the socio-political fabric of the pluralistic state and made a passionate appeal for isolating such elements by maintaining time tested unity, amity and tranquility. He said the PDP-BJP combine has reaped the dividends of polarisation and divisiveness and therefore they would continue to promote such a drift for furthering their political agenda.

“In such a situation, National Conference has an added responsibility to keep the flag of inclusiveness aloft”, he said and urged the cadre to close their ranks and meet the situation with courage and fortitude.