Dear Zindagi movie review: Alia Bhatt gives her best performance while Shah Rukh Khan blows you away with his charm 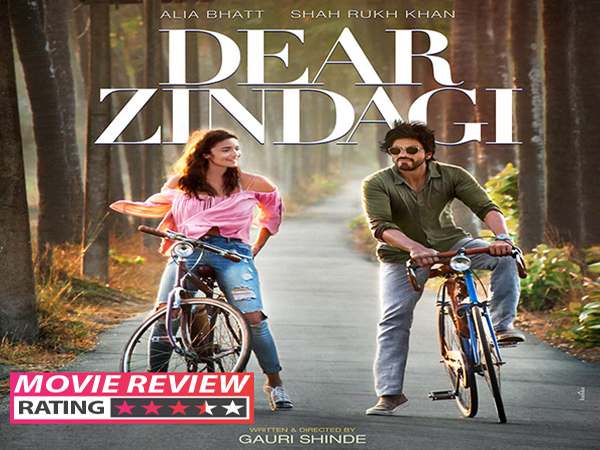 Dear Zindagi is this week’s big release. Though it is mainly promoted on Shah Rukh Khan’s name, he is seen in a supporting role, while Alia Bhatt will take on the leading role mantle. Dear Zindagi is directed by Gauri Shinde and jointly produced by Karan Johar and Shah Rukh Khan. While Alia Bhatt already has two hits this year in the form of Kapoor & Sons and Udta Punjab, Shah Rukh Khan has a disappointment in Fan. So will Alia prove lucky for SRK? Well, we don’t know about the box office fortune, but here’s what I felt about the movie…

Kaira (Alia Bhatt) is a promising cinematographer, who is going through serious crisis in her life. She is good at her work, but not getting that big break. Even her relationships in life – be it her parents or the men in her life are screwed up thanks to her own apprehensions. However when things get too much for her delicate mind to handle, she decides to consult a therapist. So enters Dr Jehangir Khan aka Jug (Shah Rukh Khan) who, in his unusual ways, tries to analyse Kaira’s problems and make her embrace life.

Make no two words about it – this is an Alia Bhatt movie, through and through. The men in the cast, even Shah Rukh Khan, are just there to support her. Dear Zindagi is just another movie that showcases the powerful potential of this talented actress. If you were awed by her performance in Udta Punjab, be prepared to be blown away by her sheer anguish here. You can’t help but not take eyes off her, when she really gets into a scene, especially the ones that show her outbursts. She is simply brilliant in her first consultation scene with Shah Rukh Khan and also in the scene where she relives her childhood trauma. I love the way Gauri Shinde interpreted her character. Kaira is a flawed individual; you do feel she is mean to her family and her boyfriends. But you can’t help but not hate for her because you can see the warmth she has for her friends. Shah Rukh, meanwhile, is a catalyst in her life as he tries to make her solve her life problems. The man uses his natural charm and dimpled smile to effective use, and we are sure girls are gonna swoon over him. However, what I liked about him the most that he allowed Alia to own the show, as he lets himself be a spectator in those scenes. Among the other leading men, Ali Zafar oozes charisma, while Kunal Kapoor lends able support.

As for direction, I must say as far as Gauri Shinde’s movies go, I still love her debut film better. It had a tighter narrative than DZ. However, that doesn’t mean Dear Zindagi is a weak attempt. It has some really fine moments, and natural warmth in the proceedings. The last meeting of SRK and Alia is an example of brilliant writing and execution. The songs by Amit Trivedi gel well with the narrative.

While Dear Zindagi makes for a feel good viewing, we do wish that the editor had snipped off a few scenes in the second half. At two and a half hours, the movie is tad too long and it allows monotony to set in. Alia’s scenes with SRK were supposed to be a highlight of the movie. But apart from the first two scenes and the last one, the rest are too preachy and repetitive. It would have also helped if Shah Rukh Khan’s character was more fleshed out, especially since it was promoted the movie on his shoulders. People expecting this to be a typical Bollywood romcom and out and out Shah Rukh Khan movie, may get disappointed.

Dear Zindagi will definitely appeal to you if you love slice of life film. A little bit of trimming here and there would have been good, and it is not a typical Bollywood movie. However that shouldn’t stop you from not witnessing one of Alia’s best performances and SRK being his charming best.