Demonetisation: Daily wagers fighting the crisis by skipping one meal a day 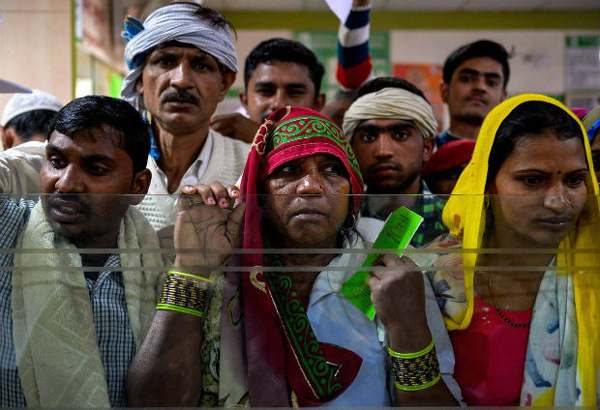 Courtesy  Business Standard
Sahil Makkar
Rajesh Kushwaha, 40, and thousands of others are yet to get a day’s work in Delhi since Prime Minister Narendra Modi announced the demonetisation of Rs 500 and Rs 1,000 notes on November 8. Kushwaha, who sleeps on a footpath outside a building material shop in Paharganj’s Chuna Mandi, is worried about fast exhaustion of paltry savings that his family is holding on to in Farrukhabad district of Uttar Pradesh.

Kushwaha fears he might have to borrow from a moneylender if the condition persists for a few more days. “It has always been a hand-to-mouth situation for us. We are in a precarious position with people postponing construction and renovation activities in the absence of cash,” said Kushwaha, who could have earned at least Rs 3,500 from 10 days’ work.

“I and many others are skipping one meal a day to survive till employment returns,” said Kushwaha, for whom even buying a detergent soap to wash clothes is a luxury now.

In Delhi, a daily wager spends at least Rs 20 for a meal. Those who share rooms with 8-10 others and cook their own meal are complaining of a sudden spike in prices of wheat, salt and other essential commodities. “The shopkeeper has increased the price of wheat flour from Rs 25 to Rs 32,” said 58-year-old Daya Ram from Jaunpur in Uttar Pradesh.

Even those who managed to find work on some days have dire stories to tell. “The employer asked me to take old currency note of Rs 500 and return him the remaining Rs 150. When I refused, he said come after a month of your pay,” said Manvir Singh, a labourer from Uttar Pradesh’s Varanasi district. Singh decided to take the old Rs 500 note and get it exchanged in a bank. He tried twice, but the branch ran out of cash before his turn came. “Finally, I gave it to a trader who exchanged the old Rs 500 note for Rs 300,” Singh complained.

It’s not just the national capital. The cash crunch has hit the daily wagers across the country. Many labourers have already left for their villages.

Saroja, a 76-year-old mother of a construction worker in Chennai, is undecided about the impact of demonetisation on the country’s economy. For her, the suffering has only increased. “My son is mostly paid with the old notes and some neighbourhood shops are accepting it. But they are forcing us to buy for the entire money. No one is tendering loose money,” said Saroja, an asthmatic patient who couldn’t visit her doctor.

Some 1,700 km from Chennai, a tailor in Metiabruz area of Kolkata is sitting idle, waiting for some work. “For the past few days, our work has almost stopped. I am unable to purchase daily grocery,” said Sheikh, who earns Rs 300 a day and during the wedding season makes up to Rs 500 a day. But this wedding season has been painful for his family.

To make things worse, some employers are paying advance salaries but in old currency. “Can we refuse our employers?” asks Gopal Singh, who toils hard to earn Rs 110 a day and lost one day’s work just for exchanging the advance pay given by his employer.

One angry worker was quick to point out: “Modi has said that poor are sleeping peacefully and rich are buying sleeping pills. The reality is other way around. Poor people are not able to sleep because of hunger.”

In Gujarat, the situation is no different. A reduction in consumption of perishable items has badly affected the vegetable vendors. Early in the morning, they were selling just about everything for Rs 5 a kg, be it radish, carrot, brinjal, bitter gourd or tomatoes, in Vejalpur, a densely populated locality in the western fringes of Ahmedabad, to clear the stock and generate some cash. “We do not have much of a choice, customers have reduced, as people are buying the bare minimum and we need cash to buy fresh stock. While the business is brisk in early mornings, as the day progresses, the demand dies down. We decided to clear our stocks in morning only,” said Deepakbhai, a vegetable seller at the mandi.

Ashokbhai, a small seller, alleged that the wholesalers have stopped giving credit as they have to pay the farmers as well. “Only the big vendors are doing business. They have arrangements with wholesalers. For the smaller ones, the situation is grim,” he said.