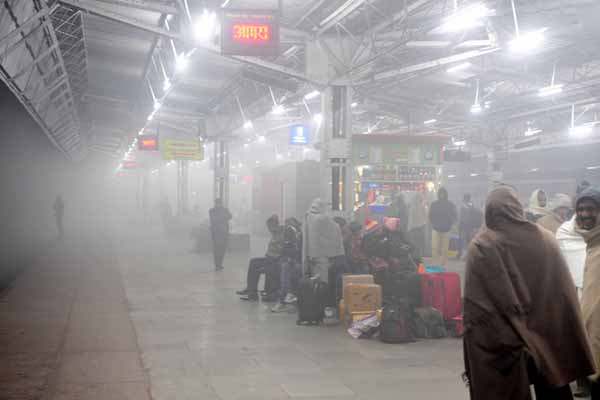 The rail services continue to affect in Jammu and Kashmir for the fourth consecutive day due to dense fog in the north India.

Jammu Tawi Railway station has about 34 pairs of Trains, which operates from Jammu Tawi, Udhampur and Katra. All the trains are reaching late by 10-14 hours, but the authorities are sending them from the source station on right time by reducing the halt time at the source station.

All the trains to Jammu Tawi, Udhampur and Mata Vaishno Devi shrine-Katra are reaching late by 10-14 hours, which leads to create chaos among the passengers. However the Railway authorities’ claims that all the trains are being sent on time from Jammu Tawi.

“All the trains are coming late, but we are sending them back on time. Only 13152 SEALDAH EXPRESS was departed late by four hours from Jammu yesterday. Rest all went on time on time,” said Ashwani Kumar, Station Manager Jammu Tawi Railway station.

“We are trying to send all the trains on time today, but the exact situation can be examined in the evening,” he added.