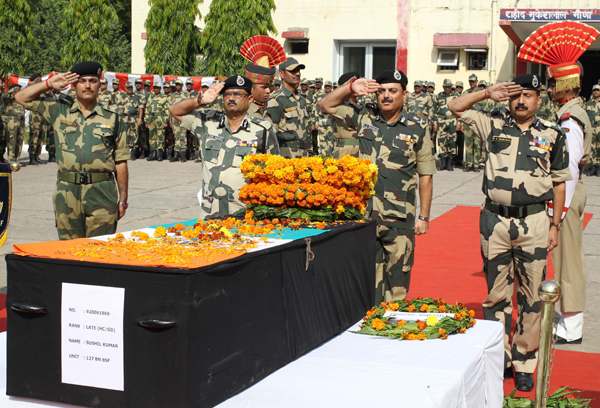 While laying the wreath on the soldier killed in last night’s shelling the Director General (DG) of Border Security Force (BSF), KK Sharma said this (the death of soldier) will not go unpunished.

The DG BSF after laying wreath on the body of Havaldar Sushil Kumar of Kurukshetra, Haryana, told reporters present there, “We will give befitting reply of this.” He added , “They killed one of our soldiers a day before and today again one more has been killed.”

DG Sharma said that BSF would not take this lying down. 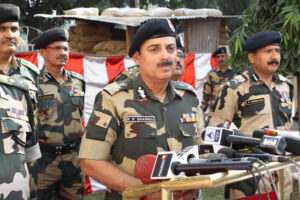 Another BSF Jawan and five  civilians were injured  during the overnight mortar shelling and heavy gun fire by Pakistan from across the border .

Among civilian injuries are two elderly ladies and a man.

According to reports a number of cattle are also injured and at least three killed.

The shelling that started last evening  continued till this morning. Havlider Sushil Kumar was injured while defending his post in Abdullaian. He was shifted to Government Medical College, Jammu , where he succumbed to his injuries. Another jawan is  still under treatment.

Most of the border residents in these areas have taken shelter in safe areas. The administration has made no arrangements for them.

Pakistan had started heavy shelling and firing from Abdullian in R S Pura sector to  Pargwal in Akhnoor , a distance of more than 30 kms .  The firing targeted the Indian border posts and the civilian population .