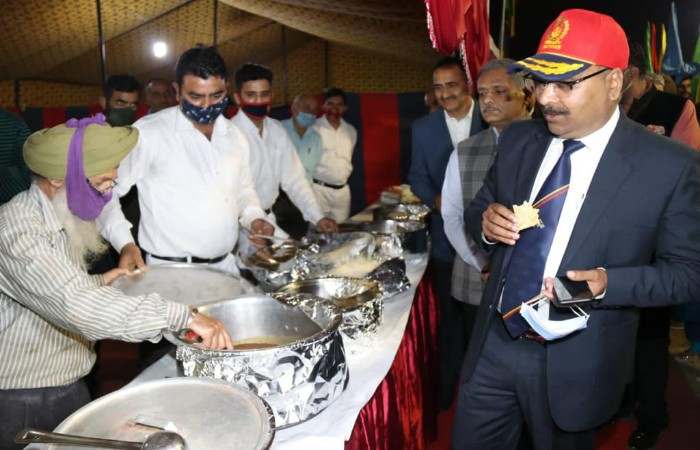 JKP went through difficult phases but faced the challenges with fortitude; leading brave and dedicated force an honour : DGP J&K

DGP’s dinner for the participants of the Inter Zone Sports Meet was organized at the end of the final day event at Gulshan Ground Jammu last evening.

While interacting with the inter zone sports meet participants on this occasion, the DGP congratulated the ADGP Armed, J&K A.K. Choudhary, IGP Armed Jammu Shri Danesh Rana and members of organizing committee for organizing the function successfully. He also appreciated the Police orchestra and police band for their performances at the function and announced cash rewards for them.

The DGP said that Jammu and Kashmir Police went through difficult phases but faced all the challenges and conquered each challenge with fortitude. He said that Jammu and Kashmir Police in the process has lost hundreds of colleagues while protecting the interests of the country. He said that this dedicated force has lost its 15 personnel and thousands were affected during peak period of COVID-19 while protecting the people from the virus.

Singh said that leading this brave and dedicated force of the country is a proud feeling for him. He said that at every forum he is highlighting the commitment and achievements of this force and at every forum people are very keen to know more about J&K Police. He said that we have to continue our work with full commitment for betterment of people of Jammu and Kashmir.

Recalling his posting as commandant 7th Bn when militancy was at its peak, the DGP said that police orchestra, police band performances were organized at Gulmarg, Pahalgam which attracted hundreds of tourists and locals.

The DGP said that it is a nice feeling to see police personnel sharing and enjoying some good times together, by participating in such sports functions. He impressed upon the participants of the Inter Zone Sports Meet and members of cultural teams to continue to work hard so as to bring more glory to the force and relief to the people .

The DGP went to different food stalls put up by different zones for serving delicacies to the participants. The DGP also witnessed a cultural programme by the Central Police cultural team.