Dogra Front, Shiv Sena protest against the CAPD for slashing the names from the ration list 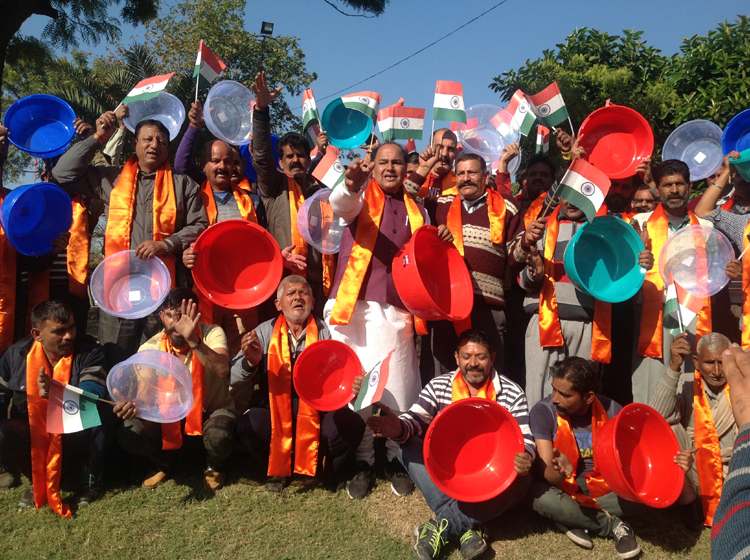 Jammu, December 20: The workers of DOGR FRONT & SHIV SENA under the leadership of President Ashok Gupta took out a protest in Jammu city by carrying empty utensils in their hands against the CAPD for non supply of Ration and slashing the name of people from the ration list and discarding there ration cards.

The protestors threatened to ghearo the CAPD Minister as the names of the people under the BPL have been struggling to find their names in the ration list due to which they are not able to avail there ration quota.

Ashok Gupta, flayed the Government and the CAPD Department for not supplying the ration.

The ration depots is for the people who cannot afford the ration on market prices and slashing the names of people from the ration list is nothing less than an attack on their lives.

Gupta said that due to non-availability of the ration, the people were facing lots of problems especially BPL families.

The protest is against the  Food and Supply Minister for non availability of kerosene oil, sugar. He said that implementation of the NFS Bill was not being made in the State.

Ashok Gupta alleged that under NFSA a large number of genuine ration cards have been cancelled and not issued to the genuine consumers who are permanent residents and were having life- long ration cards.

He demanded 10 kg atta per member to each family, as 7 kg per member is not sufficient and all the ration card holders of BPL, APL families should get the benefit of the Food Security Bill.

He demanded for the inclusion of edible oil, sugar, salt, pulses, vegetables, LPG and kerosene oil in the NFSA from the State Govt side.

The party people who were present at the time of protest were Bodh Raj, Tony, Vijay, Bantu, Kali Das, Rajinder, Gyan, Shan, Ganesh, Abhishek and various others were present.