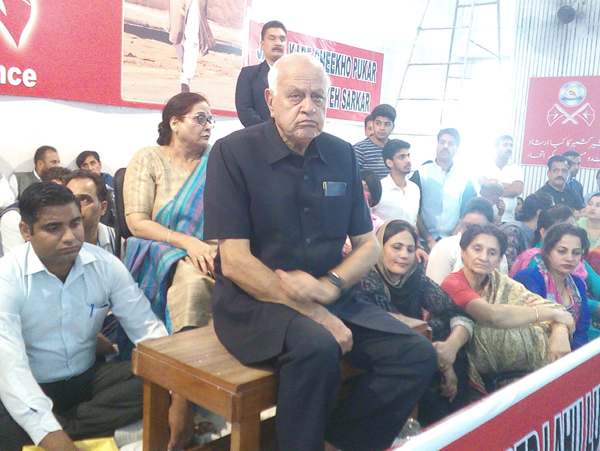 For the first time since  National Conference lost 2014  Assembly elections,  the party president and former Chief Minister Farooq Abdullah  asked Chief Minister  Mehbooba Mufti  to  quit as she  could not protect lives and property of the people in Kashmir.

Addressing a convention of the  women leaders of National Conference at Sher-e-Kashmir   Bhavan, the   provincial headquarters of the party in Jammu,  Farooq Abdullah  said that the people have had enough of Mehbooba Mufti and her failures. “ It would be good if Mehbooba realizes that her  miles-long missteps during her seven-month long rule have unleashed death and destruction  in   Kashmir. The only way out is that she should step down.”

Farooq Abdullah and  his son Omar Abdullah, also working president of NC and former Chief Minister, were  among the front line leaders who had  urged Mehbooba Mufti to take over reins of the government after her father Mufti Mohammad Sayeed’s death in January this year.

“ Now Kashmir is burning and the borders  flared up, border residents are living under the shadow of fear of getting consumed by mortar shells. She is unable to do anything for them. She is a total failure,” Farooq said in  the severest of  indictment of the Chief Minister.

He also asked Delhi to open dialogue with Pakistan to stop this carnage on borders and save Kashmir from all the trauma that it has undergone all these years.