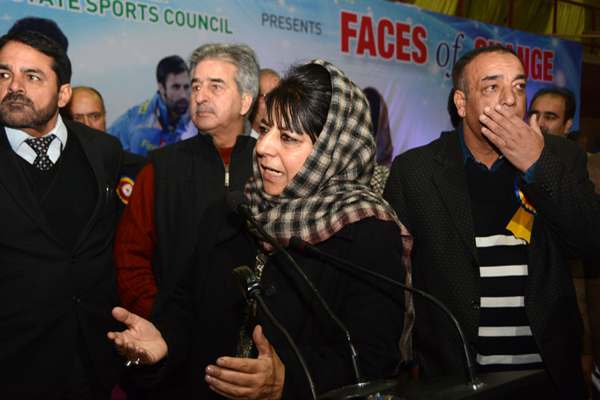 Srinagar, December 06
Jammu and Kashmir Chief Minister Mehbooba Mufti on Tuesday said the statement of Farooq Abdullah saying “we are with Hurriyat andtheir movement” has proved that National Conference can go to any extent to grab power.”National Conference is playing an active role in deteriorating situation in Kashmir during past five months,” she accused and added the NC of playing with lives of people to “grab power”. while talking to  reporters on the sidelines of a function in Srinagar.
The Chief Minister said that Omar (Abdullah) has been External Affairs minister in BJP government. He has talked against Pakistan at the national and international level and even called for declaring Pakistan as a terrorist state. Dr Farooq has called for bombing of Pakistan and even called for pushing Hurriyat leaders into Jhelum River. But today he is saying something else.

“It has, thus, become clear once again that National Conference could play with the lives of anyone, including kids and women for the sake of power,” she said
For More News Updates Click Here