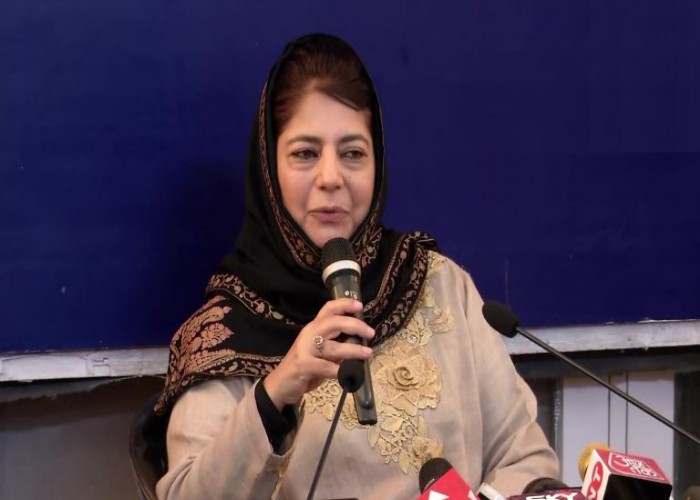 30 PDP president Mehbooba Mufti has asked the government not to trample on sentiments of people in J&K by fiddling with Waqf properties.
She cautioned the government against the consequences such actions could cause in the place, and made a specific mention about the reported plans to convert Eidgah land in Srinagar for uses other than the religious . She said Eidgah, for centuries, is associated with the faith of Muslims, where they pray and seek mercy from Allah. In a statement here , Mehbooba Mufti asked the government from such actions , which may trigger an unwelcome situation.
While cautioning administration over fiddling with the sentiments of the people of Kashmir and properties of the Muslim community, PDP President repeated her call for the government to revisit its policies which are being implemented rapidly and without any regard to law, interests or sentiments of the people.
Referring to the latest statements from the government and some waqf authorities on converting Eid Gah for different kinds of facilities which are at cross purposes with the Wakf laws and the specific use for which land had been donated by Mir Syed Ali Hamdani to Muslims of Kashmir some 600 years back.  “The statements issued about Eid Gah have hurt the sentiments of local Muslim populace and they are watching  the situation with lots of apprehensions and  anything done against the wishes of the people and denying the space to the locals for prayers and for whatever use they have traditionally been putting it to will be fraught with dangers.”
The PDP President asked the government not to test the patience of the people but unfortunately, said Mehbooba, “ our advice isn’t heeded and the government is creating a pressure cooker kind of situation in the state, trying to hit the economic, social, cultural, religious and political interests of the people.” There’s a limit to which people can take this daily dose of humiliation and deprivation, she said.
She said it seems the government has unleashed a war against the people, especially against the people of Kashmir and Many areas of Jammu. “The need of the hour is that the government must feel the heartbeats of the people and respond to them positively. “The strong arm tactics have historically failed in Kashmir and Kashmir is not not going to change its basic peace loving character or cultural and religious identity under any pressure.The resistance for upholding their constitutional, legal, and economic rights will continue,” she said, adding that the assault unleashed upon the fruit industry is the latest example of the government’s vindictive policies and how its machinery is hell-bent on depriving people of their livelihoods.
Mehbooba said that this government has no representative character and no authority to take decisions on behalf of any community in the state, especially the Muslim community to which the Waqf properties belong. “But now, it is not only the government that is directly encroaching upon this, but the BJP has unleashed its other associate bodies to claim land that has been always in the possession of the Muslim community and this trend has started in Pir Panchal area where people are very upset about creating fissures in the name of Waqf property and disputes that they are trying to generate about it.” She said it’s mind boggling that this administration is trying to disturb the peace of Peer Panchal, Chenab and other areas even when serious incidents of militancy are reported regularly from there. The Godi media and the government agencies are underplaying this serious situation in Jammu just because the state is under direct central rule for more than four years and their are no local scapegoats now to put the blame on, Mehbooba said.