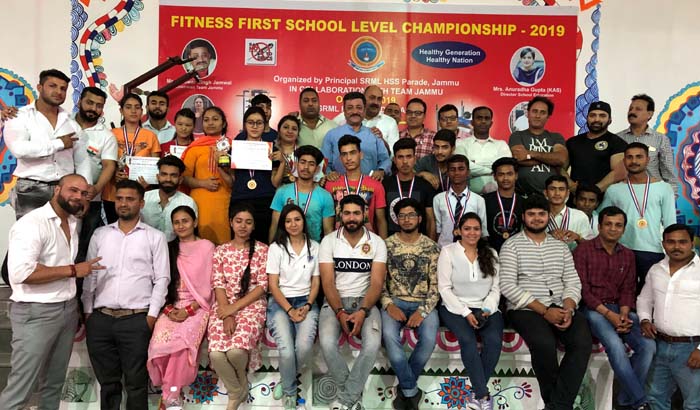 Calling upon youth of Jammu region to stand united and shoulder their responsibility in upholding Dogra ethos, Chairman Team Jammu, Zorawar Singh Jamwal today said that it was high time to mobilize masses especially youth to take the on-going battle to the logical conclusion.

Chairman, Team Jammu, Zorawar Singh Jamwal, who was chief guest during “Fitness First School Level Championship-2019, organized at prestigious Shri Ranbir Model Higher Secondary School, Jammu, in address said, “the time has come when youth of Jammu region to lead from the front and come up to the expectations of the people. It is now the youth that have to step forward and take their fight against social evil like drug addiction to the logical conclusion”.

“Jammu is standing on crossroads. On side, it is facing through a very crucial juncture as forces inimical to brotherhood and communal harmony are hell bent to set this region on the fire for their petty political gains, while on the other side, Drug Mafia is trapping the youth to fall in their trap through drug abuse,” highlighted Zorawar Singh Jamwal adding that “Now the youth have to come forward and fight out such elements.”

In his address, Zorawar Singh Jamwal congratulated about 500 students hailing from various other schools of City for their participation in the competition and guided the students keep on participating in such events as participation is more important than victory. “Ranbir Higher Secondary School has big history with former Army Chief, Gen N C Vij, Padam Shri, Prof R N Shastri, Padma Bhushan, Balraj Puri, stalwart politician Trilochan Dutt, renowned journalist O P Saraf and famous singer first superstar of Indian film Industry K L Sehgal being alumini of this heritage School and students must follow their foot-steps while carving their future,” he highlighted.

Principal, SRML, Hr Secondary Schoo, Mrs Shafqat Javed Chib, who presided over the function, in her address thanked Principals of Govt Hr Secondary Schools, Bakshi Nagar, Rehari Sarwal, Hari Singh and Nowabad for allowing their students to participate in the competition, which is first of its kind. She also appreciated girl students including Rabia Khanam, Monika Devi, Stanzin and Lobzang for their participation in bench press event.

Urging the youth to stay away from Drug abuse and play an important role in Nation Building and remain engaged in all sort of sports activities besides excelling in academics, Shafqat Javed Chib also detailed the necessity of raising more infra-structure like open and indoor Stadiums and promote sports activities in each and every district of the State so that our young generation remains healthy and physically fit.