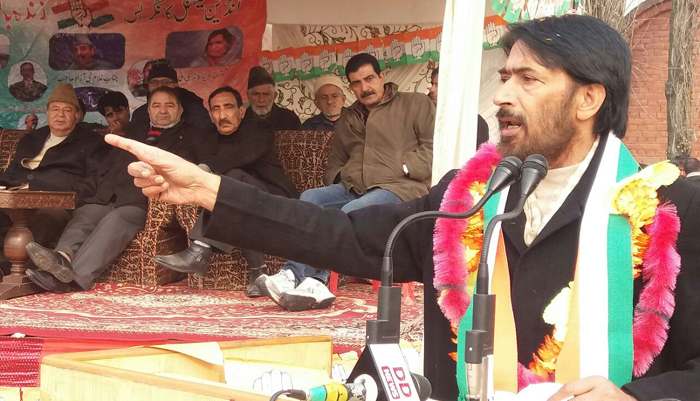 Baramulla, December 10: Describing the recent spurt in militancy as outcome of the betrayal and wrong policies of the PDP, Jammu and Kashmir Pradesh Congress Committee (JKPCC) President G.A. Mir Saturday blamed the coalition government for the current turbulent situation in the Valley.

Addressing a day-long party convention in north Kashmir’s Baramulla district, he said, “The wrong policies of the PDP-BJP coalition government in the State has resulted in a sudden rise in militancy related incidents and isolation of the masses. During 2014 elections, PDP sought votes from the people on the promise of stopping BJP and RSS from coming to power in the J&K. However, as soon the elections were over, same PDP for the sake of power betrayed the mandate of people and entered into an unholy alliance with the Saffron Party.”

“As soon the elections were over, people of the state came to know about the hidden agenda of this party (PDP), it led to their alienation. The subsequent U-turns by floating different stories on the the formation of the government with the BJP has exposed the PDP before the people leading to the unrest in the valley,” Mir added.

Expressing serious concern over the deteriorating law and order situation in the Valley, the State Congress Chief said PDP cannot escape the responsibility of the losses caused to both life and property in the last five-month unrest. “Though the unrest is still going on in some areas, PDP is least bothered about it and is doing whatever it benefits them,” Mir said.

“Despite the resentment and anger against the PDP, for its false promises with the people, the party (PDP) is trying to portray different picture of the situation in Kashmir. The PDP is trying to shift the blame of its failures on the people especially opposition, which is not only unfortunate, but highly condemnable,” he added.

The JKPCC President said that not only human rights violation were on rise, but political killings were being encouraged by the PDP to secure power. However, he warned the PDP that such kind of atrocities won’t be tolerated by the for long.

He said the PDP-led government has converted Kashmir into a prison, where thousands of youth are languishing in jails, hundreds, including teenagers, have been booked under the PSA. “Peace cannot be achieved by repressive measures. Government should release the detained youth immediately and stop harassing  common people on the pretext of restoring normalcy,” he demanded.

Mir said that Congress Party as a responsible opposition will continue to fight against the repression and human rights violations and will never compromise on the security of the people.

Lashing out at the government for failing to even provide basic amenities to the people, Mir said, “Masses are suffering due to non-availability of power, ration and other basic amenities. The unemployment is rising at an alarming pace and it seems the government of the day is least bothered to solve these problems. Due to the wrong approach of the coalition, the administration also has become paralyzed and unresponsive to genuine needs of the people,” he said.

Addressing the convention former PCC President Peerzada Mohammad Syed lashed out at the coalition government for failing to fulfill their promises which they had made with the electorates. He said instead of reaching out to the people for resolution of the issues concerning them, the government is taking them far-granted. Syed said it is the PDP which is responsible for discontent among people, resulting into an extremely volatile in South Kashmir and elsewhere in the valley.

Speaking on the occasion MLA Sopore Haji Ab. Rashid Dar blamed the government for failing to mitigate the sufferings of the people. He said people were feeling insecure under PDP-BJP rule, who are equally responsible for the crisis in the State.

JKPCC vice president and MLC Gulam Nabi Monga while addressing the convention hit out at coalition government for being insensitive to human rights violations, which are on rise. He sought an explanation from the government over the killing of former sarpanch Sajad Ahmad Malik and asked it to come clear on his killing and identify the killers for severe punishment.