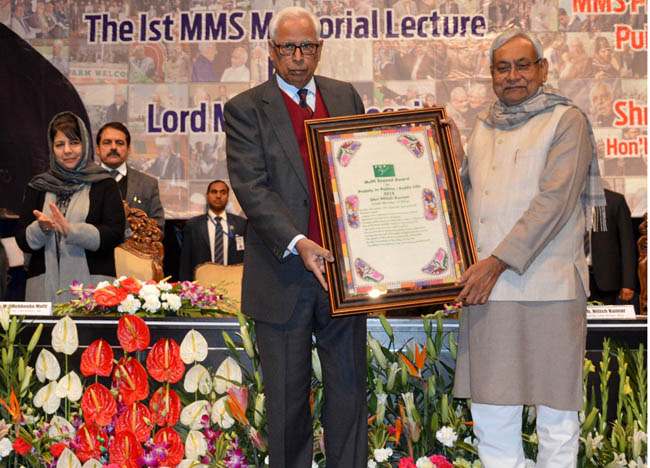 Paying tributes to Shri Mufti Mohammad Sayeed on his 2nd Death Anniversary, Governor recalled his long association with the former since Sh. Mufti took over as Union Home Minister. He described him as a man who was entirely devoted to advancing the welfare of his people and development of the State.

Citing some episodes during Governor’s frequent interactions with Mufti Sayeed when he was Chief minister of J&K, Governor observed that one of his convictions was his yearning for advancing public good and his sustained and uncommon eagerness to closely follow up on the implementation of development works.

Governor observed that our State has suffered on varied counts because of domestic and external factors which have been detrimental to J&K’s progress and development. He appealed that we should firmly resolve to negate these factors and work collectively towards achieving our goals.

Governor observed that all governments need to work dutifully, in a transparent and accountable manner, and achieve their goals in an equitable and inclusive manner. He cautioned that slackness on the part of the administrative machinery would adversely affect the efforts to ameliorate a lot of the disadvantaged sections of the society.

Expressing concern Governor stressed the need for maximum care being devoted to promoting the interests of youth and not allow disruptions in their study and examination schedules, which would hamper their careers.

Governor presented National Award on “Probity in Politics & Public Life” to Sh. Nitish Kumar, Chief Minister of Bihar. Congratulating Sh. Kumar on being conferred with this Award, Governor observed that the former’s dedication and commitment towards his people has ushered Bihar in an era of progress and development. He wished him success in all his endeavors aimed to revolutionize the developmental scenario of Bihar.

Governor thanked Lord Meghnad for his lucid lecture about the manner Britain has dealt with the devolution of powers in regard to Ireland and Scotland.

The Welcome Address was given by Choudhary Zulfkar Ali, Minister for Food, Civil Supplies and Consumer Affairs who spoke about Mufti Sayeed’s Personality and Politics while Sh. Haseeb Drabu, Minister for Finance gave a Vote of Thanks.

Ministers, Legislators, prominent Citizens were among those present on the occasion.