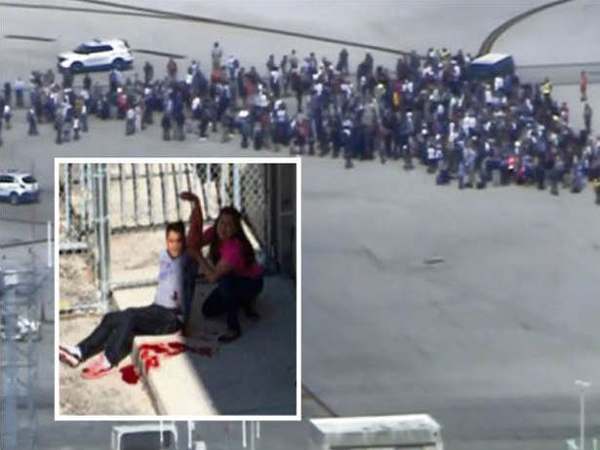 FORT LAUDERDALE, Fla. An Army veteran who complained that the government was controlling his mind drew a gun from his checked luggage on arrival at the Fort Lauderdale airport and opened fire in the baggage claim area Friday, killing five people and wounding eight, authorities said.

He was taken into custody after throwing his empty weapon down and lying spread-eagle on the ground, one witness said.

they could or hide under the chairs,” the witness, Mark Lea, told MSNBC. “He just kind of continued coming in, just randomly shooting at people, no rhyme or reason to it.”

The gunman was identified as 26-year-old Esteban Santiago of Anchorage, Alaska, who served in Iraq with the National Guard but was demoted and discharged last year for unsatisfactory performance. His brother said he had been receiving psychological treatment recently.

A law enforcement official told The Associated Press that Santiago had walked into the FBI office in Anchorage in November to say that the U.S. government was controlling his mind and making him watch Islamic State videos.

Agents questioned an agitated and disjointed-sounding Santiago and then called police, who took him for a mental health evaluation, according to the official, who was not authorized to discuss the case and spoke on condition of anonymity.

FBI agent George Piro, who is in charge of the Miami field office, confirmed that Santiago had come into the Anchorage office and said he clearly indicated at the time that he was not intent on hurting anyone.

Authorities said the motive for the attack was under investigation. Shortly after the shooting, and before details of Santiago’s mental health became public, Sen. Bill Nelson of Florida said that it remained to be seen whether it was terrorism or the work of “someone who is mentally deranged.”

Piro said authorities are looking at leads in several states and have not ruled out terrorism. “We’re looking at every angle, including the terrorism angle,” he said

Santiago, who is in federal custody, will face federal charges and is expected to appear in court Monday, Piro said.

One witness said the attacker gunned down his victims without a word and kept shooting until he ran out of ammunition for his handgun, sending panicked travelers running out of the terminal and spilling onto the tarmac, baggage in hand.

Others hid in bathroom stalls or crouched behind cars or anything else they could find as police and paramedics rushed in to help the wounded and establish whether there were any other gunmen.

Bruce Hugon, who had flown in from Indianapolis for a vacation, was at the baggage carousel when he heard four or five pops and saw everyone drop down on the ground. He said a woman next to him tried to get up and was shot in the head.

“The guy must have been standing over me at one point. I could smell the gunpowder,” he said. “I thought I was about to feel a piercing pain or nothing at all because I would have been dead.”

It is legal for airline passengers to travel with guns and ammunition as long as the firearms are put in a checked bag — not a carry-on — and are unloaded and locked in a hard-sided container. Guns must be declared to the airline at check-in.