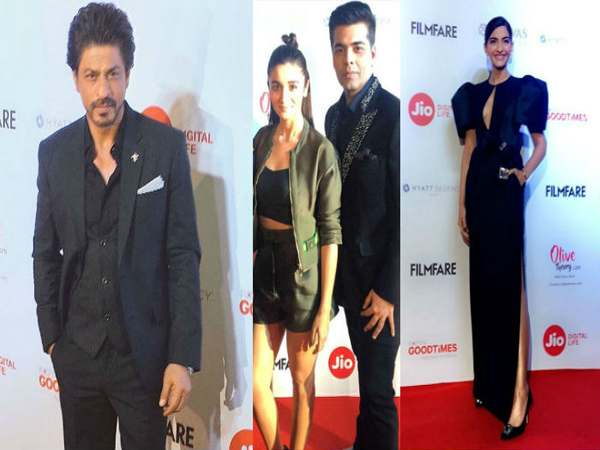 It’s happening! The most awaited awards show, Jio Filmfare Awards are just around the corner. It’s not just only a star-studded event recognizing the best of talent in Bollywood, but one that CELEBRATES the movies and the entire film industry! And this time, Jio is going to bring all the fans closer to the 62nd Filmfare awards with their association. Now that is one magnificent pair. With their collective reach, Jio Filmfare Awards is sure to tap into very Bollywood fan’s heart out there.

As a run-up to the magnificent night, Jio and Filmfare organised a pre-awards party recently, and it was a star-studded affair. Bollywood came out in style and Shah Rukh Khan, Alia Bhatt, Karan Johar, Sonakshi Sinha, Sonam Kapoor – were all there to celebrate cinema and have a fun-night together. And needleless to say, the actors stepped out on the red carpet in style and panache.

Jio Filmfare Awards pre-awards party was hosted by Neha Dhupia, who kept everyone entertained, and cocktails added the zing to the event. Neha interacted with the Jio Filmfare Awards nominees and their fun banter left everyone in splits. Following that, there was a glamorous fashion show by ace designer Manish Malhotra, who got the loudest round of applause. Amit Sharma, Sophie Choudhary, Jasleen Royale’s gleeful performances kept the entertainment quotient of the party high and going!

62nd Jio Filmfare Awards will be hosted by Shah Rukh Khan, Karan Johar and Manish Paul. And if this pre-awards party is anything to go by, the main event will be an affair to remember!