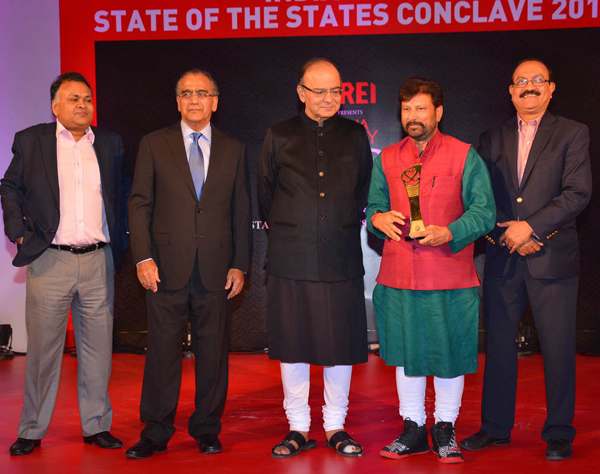 New Delhi, November 05: Jammu and Kashmir has bagged the ‘Big State of the States’ (SoS) award in environment sector. The award was conferred to the State by the India Today Group at a function in News Delhi

Union Minister for Finance and Corporate Affairs, Arun Jaitley and Editor-in-Chief, India Today, Arun Purie, presented the award to the Chief Ministers and Ministers from various states at function of India Today Conclave-2016 held at ITC Maurya in New Delhi.

Minister for Forest, Environment and Ecology, Chaudhary Lal Singh, who was flanked by senior Forest officials from J&K, received the award for the most improved big ‘State of States’ in environment sector, while as Meghalaya and Manipur were adjudged for the improved small States award in environment category. In overall ranking, the Jammu and Kashmir has jumped from number 4 in 2015 to rank 3 this year.

While presenting the awards, the Union Finance Minister said that the annual India Today “The State of The States award is the country’s most extensive and thorough study to ascertain which Indian states are leading in terms of governance, education, agriculture, healthcare, infrastructure, investment scenario, economy, environment, cleanliness and inclusive development”. The Union Finance Minster congratulated all the winners and the ‘most improved’ states of the India in all such sectors.

While receiving the award Chaudhary Lal Singh lauded the organizers for choosing Jammu and Kashmir for the award, saying “much more was to be done on the ground to improve the overall environmental scenario across the State”. He also lauded the dynamic officials of the Forest department for bringing the State to an improvised position.

“We will ensure conservation of the State’s biodiversity, major ecosystems and critical landscapes by promoting environmental governance through legislation, policy and advocacy,” Singh told the delegates at the Conclave. He said besides conservation, the infrastructural development under eco-friendly environment was on the priority of the government.

Earlier in his speech Editor-in-chief, India Today Group, Arun Purie said for the last over one decade, India Today’s annual State of the State’s Survey has emerged as the gold survey for analyzing and recognizing the primary units of the governance that keep India ticking over. “For India to achieve a sustainable growth rate of over 9 per cent, most states need to grow at 12-13 per cent. I am confident enough if politics doesn’t derail us, it is entirely possible,” Purie said.  “We should all have faith in our democracy and above all in our people. We are an amazing country with such diverse, talented and smart people. Our country is bursting with youthful energy with 65 per cent of our population being below the age of 35. My hope comes from watching ordinary Indians doing extraordinary things all around us,” Purie said.

He said that future of India lies with the States rather with the Centre, which should look at larger policy concerns. “States have a much better idea of their needs. They are also in a better position to the welfare and wellbeing of their citizens,” he said.

Pertinently the organizers earlier said that the annual INDIA TODAY “The State of the States” study was an attempt to find out which of India’s states offers its citizens the best opportunities, both at work and outside. The study, according to them, tracks each state’s performance over time and, in particular, records the changes over the last year. It takes into account both the business environment and the quality of life. The parameters on which the states are judged include governance, education, agriculture, healthcare, infrastructure, investment scenario, economy, environment, cleanliness, and inclusive development. Its objectivity and scope have made this study the gold standard for the health of Indian states.