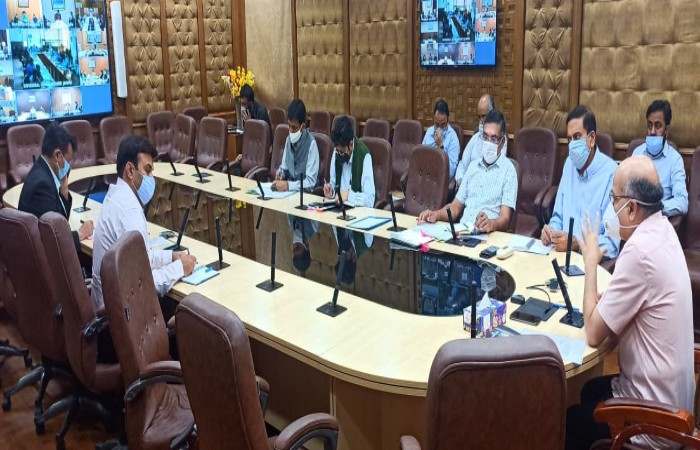 Facilities being ramped up all along the route

The Chief Secretary, B V R Subrahmanyam today chaired a meeting to review the preparations being made for a safe and hassle-free Shri Amarnathji Yatra 2021.

The Chief Secretary reviewed the arrangements for safe, smooth, and secure movement of pilgrims particularly along the Jammu-Srinagar National Highway and Baltal and Chandanwari yatra tracks up to the Holy Cave.

He enjoined upon the administration to undertake preparations for an expected footfall of 6 lakh yatris this year. To ensure secure passage of pilgrims, directions were issued to appropriately ramp up the holding capacities, yatri accommodations, and public utilities across the route from Lakhanpur to the Holy cave and vice-versa; with special attention to arrangements in consideration of weather extremities.

He directed the Divisional Commissioners of Kashmir and Jammu to closely monitor the arrangements being put in place in transit camps along the Yatra route particularly at Kathua, Samba, Jammu, Udhampur, Ramban, Anantnag, Srinagar, Baltal, and Chandanwari. Deputy Commissioners were directed to enhance the holding-capacity of transit camps under their jurisdictions to accommodate approximately 1.22 lakh yatris including both the cave-bound pilgrims as well as those on the return journey; on a daily basis.

The Chief Secretary asked the Divisional Commissioners to ensure availability of basic amenities at these transit camps, besides, ensuring adequate provisions all along the route. They were asked to project additional requirement of resources to the Tourism Department for timely projection and approval.

To ensure completion of various works and arrangements well in time, it was impressed upon the concerned to initiate the implementation of plans and projects in the 1st week of April 2021.