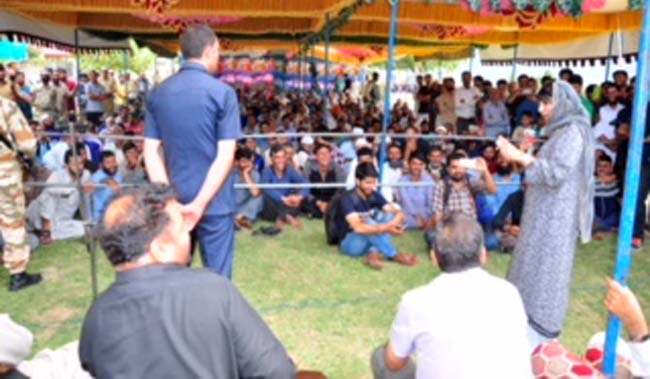 Says her Party would take all steps for protecting Article 35-A, State’s special status

Peoples Democratic Party President and former Chief Minister, Mehbooba Mufti today reiterated that the founding principles of her Party have been resolution of Jammu & Kashmir and ensuring durable peace in South Asia by ensuring Indo-Pak friendship and amity.

Speaking at a workers meeting here today, Mehbooba Mufti said eversince its formation, PDP has been striving hard for realising these objectives with all seriousness. “When our Party formed government in 2002 with Congress we laid out a schematic plan for attainment of these basic goals and bringing succour to common masses in the State. Every citizen of the State can vouch that measures, unheard of in the past, were taken which gave people enough confidence to think that things started moving on the vexed issues”, she said.

Though that momentum, the PDP President added, lost its pace after 2008, but the Party continued with its basic agenda and with people’s approval when PDP came to power again in 2015 it made its alliance partner to commit on the issues of the State through an Agenda of Alliance, a document which got recognition at the national level. She said even while sharing power with BJP, her Party continued to push for its core agenda like protection of Article 370, dialogue with all stakeholders in the State and resumption of peace process between India and Pakistan. This, she said, besides securing highest ever economic package for the State.

Referring to Article 35-A, the PDP President said her Party is committed for its preservation and every sacrifice would be made to protect it. “During my Government, I made every effort from engaging top notch lawyers to raising political awareness in the country and the State about the need for protection of Article 35-A and in future also whatever would be required me and my Party would do for protecting the special status of the State”, she said in her address.