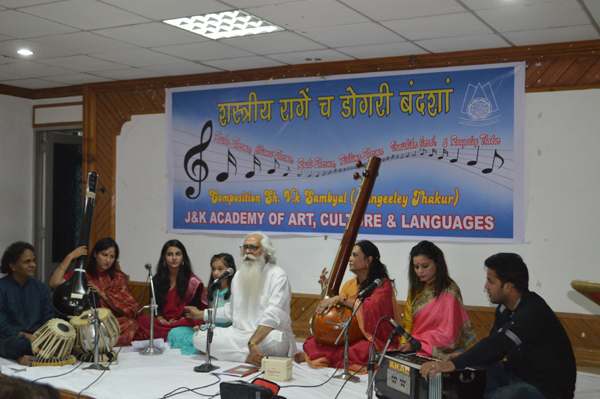 This idea was conceived and developed by  V.K Sambyal, a renowned Classical Singer and former Director Radio Kashmir, Jammu.

While delivering his presidential address, Prof Lalit Mangotra on the outset complimented  VK Sambyal popularly known as Rangeeley Thakur for composing such beautiful compositions of classical music and also congratulated J&K Academy of Art, Culture and Languages for organizing this classical musical event first time here in Jammu. He also applauded the singers and said that they succeeded to make this evening a memorable one.

While addressing the packed KL Saigal Hall, TK Jalali also appreciated the artists in general and  VK Sambyal in particular for compositions of the classical nodes in Dogri and impressive presentation and said that the programme was of the high standard and will remain in memories for long for its class presentation. While appreciating the J&K Cultural Academy, he further said that since last few  years JKAACL is doing tremendous job for the promotion of art, culture and literature and said that much of new initiatives have been taken up covering all the departments of music, visual and performing arts, literature of the languages being written in various regional languages.

Earlier welcoming the august gathering, Dr. Arvinder Singh Amn informed about the future activities of the J&K Cultural Academy and said that this musical evening was finalized after the constant meetings with  VK Sambyal and for the first time classical compositions in dogri were presented by the local artists which were composed by Rangeeley Thakur.

Those who participated in the programme were  V.K.Sambyal,  Kusha Sharma , Chinmay  Sharma, .Radhika, Roshi Sharma, Vanshika Jaral all disciples  of  V.K.Sambyal.