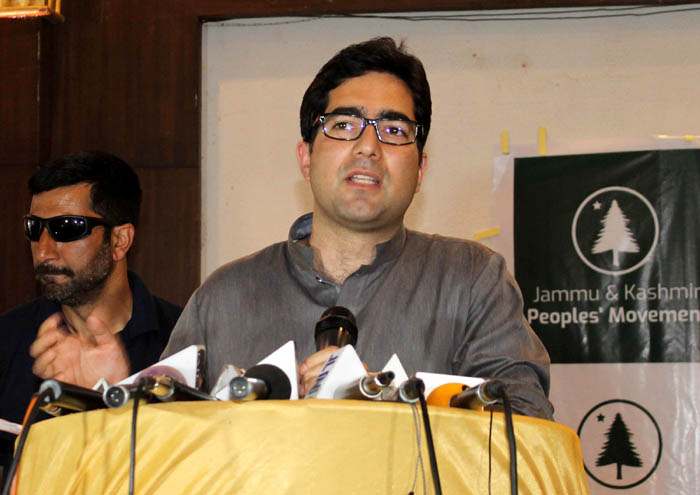 Jammu and Kashmir Peoples movement (JKPM) has rejected the unilateral resignations of Dr. Shah Faesal and Javed Mustafa Mir from the party Presidentship and chairmanship respectively in a meeting on Sunday.

Shah Faesal, the 37 year-old bureaucrat-turned politician on August 9 removed the party tag from his bio on twitter, giving rise to speculation that he could rejoin the administration back or pursue higher studies. Faesal founded a new political party aiming at an alternate front for greener politics in March 2019.

JKPM in a statement issued on Sunday said, “The council has met for the first time after the media reported about the resignation of Dr. Shah Faesal and Javed Mustafa Mir from the Party positions and unanimously rejected their unilateral resignations.”

The statement reads that the executive council has not received any formal resignation letters as per the constitution of the party from the said leaders and therefore they continue to be in the party positions they enjoyed before.

The newly elected working president of the Peoples Movement, Dr. Mohammad Hussain Paddar said, “The council members tried to reach them but failed as they were in home detention.”

In the statement, Peoples Movement said that when Dr. Shah Faesal and Javed Mustafa Mir have not tendered any formal resignation to the state executive council, how come the party will take a call on matters that did not happen in reality.

However, soon after Shah Faesal dropped JKPM President tag from his bio on social media, a statement was issued by the Peoples Movement that reads that after Faesal had stepped down as party president and vice president Feroze Peerzada had been appointed to replace him.

‘State Executive Committee of J&K Peoples Movement (JKPM) in an online meeting today discussed the ongoing political developments in the state. In the said meeting, the request of Dr. Shah Faesal to spare him from the organisational responsibilities was discussed. Dr Shah Faesal had informed State Executive Members that he is not in a position to continue with political activities and wants to be freed from the responsibilities of the organisation,” the statement said.

However, the new development in the party is averse to this. The party has distanced from the views expressed by the former Vice-president and in the capacity of the interim President, Mr. Feroz Peerzada and mentioned his views as “personal”.

Taking strong resentment to the statement issued by the Feroz Peerzada in his personal capacity that the party had accepted the resignation of President Dr. Shah Faesal and Chairman Javed Mustafa Mir, a former minister who left the People’s Democratic Party to join Faesal’s group, rejected the statements as “baseless, unfounded, imaginary and never reached” at by the executive council.

According to the statement, the executive council of JKPM has met for the first time since the media reported Shah Faesal has ended political gig and resigned from the party presidentship. The statement reads, “An urgent meeting of the state executive council of Jammu and Kashmir Peoples Movement (JKPM) to deliberate on the resignations of the party Patron, Dr. Shah Faesal and Party Chairman, Javed Mustafa Mir.”

In the statement, the Peoples Movement while laying stress on the genesis of the party says, “JKPM was born for fair, transparent, progressive politics and development of Jammu and Kashmir and the country and Dr. Shah Faesal and Javed Mustafa Mir are the lighting conductors of that vision and mission. JKPM will work for the democracy of the country and the rights of the people of Jammu and Kashmir.”

The executive council has also set-up a temporary hierarchy in an effort to ward off the confusion and protests in the party cadre and across Jammu and Kashmir.