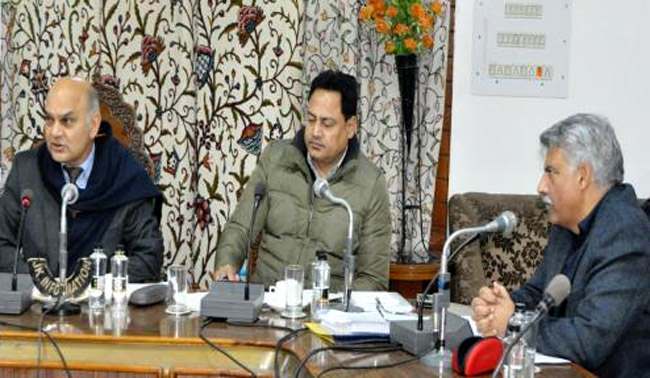 Advisor to Governor, Kewal Kumar Sharma on Saturday said the power crisis in J&K would be overcome to a large extent by 2020 as massive infrastructure upgradation is going on in this key sector.

Taking a comprehensive review of the of power sector at a high-level meeting here today, Sharma asked the Power Development Department to ensure completion of all the infrastructure upgradation projects within the set timeframe so that their benefits reach the people at the earliest. He said availability of assured electricity is one of the major concerns of the people in Kashmir especially during harsh winters. “When I was appointed Advisor recently, the main concern Governor expressed to me was to look into the power crisis in the State, and I am trying my best to mobilize the officials and the concerned wings of the department to expedite the augmentation projects,” he said.

Sharma said time has also come when the State would also look into the possibilities of using the solar and other renewable energies to tide over the power crisis across the State.

Sharma said the one of the key projects nearing completion is Alasteng Grid Station which would go a long way in augmenting the power scenario in the Valley. He said the Grid station was being constructed at a cost of around Rs 109 crore and so far around Rs 81 crore has been spent on its construction.

During the meeting, Chief Engineer, PDD, Hashmat Qazi briefed the Advisor about the overall functioning of the department. He informed the Advisor that the distribution infrastructure is manned and operated by around 9109 employees of various cadres as against the sanctioned strength of the 11563. He informed that the electric maintenance and Rural Electrification Wing (EMRE) Kashmir was a sole entity for maintenance and operations of the power system below 33 KV level in Kashmir. He further said that EM&RE wing caters to diverse mix of around 9.65 lakh consumers of various categories—having aggregate registered load of 1332.04 MV.

The Advisor was informed that in order to cater to the registered demand of the consumers, EMRE has a network infrastructure both at 33/11 KV level as well as 11/0.4KV level in far-flung areas where grid connectivity hasn’t been extended till date. “For instance, in Machil, Gurez, the power supply is provided by DG sets,” Qazi said.

The Advisor was informed out of total 965239 consumers, 399693 consumers fall under metered category. The officials informed the meeting that during summers, PDD supplies 24X7, electricity to consumers without any curtailment. They said with the change in the climate, the department faces the challenges of supplying increased load which used to increase gradually from autumn and peaked during winter. However, they informed that this year the valley witnessed snowfall in November for the first time since 2009—resulting in abrupt surge in demand. The meeting was also informed about the current curtailment schedule implemented in the valley.

The Advisor directed the officials to do regular inspection of consumers and prevent illegal use of power.

During the meeting the status of the works under centrally sponsored schemes was also discussed threadbare. He said government would put in place an appropriate mechanism to regularly monitor progress on execution of such projects.

“We need to ensure that we work in close coordination. Officials must go on TV, use Radio and use mass media to educate consumers about drawbacks of power pilferage,” the Advisor said.