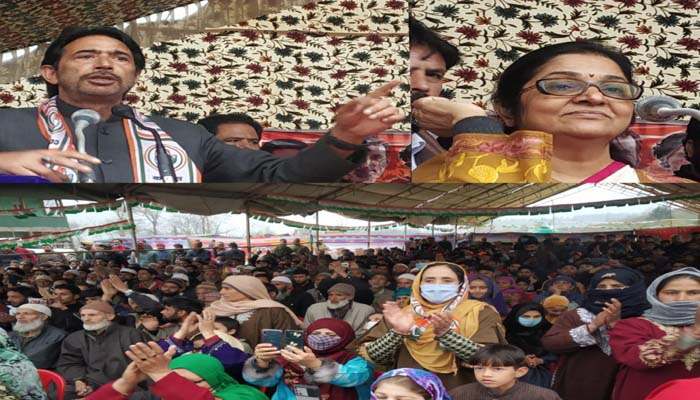 Party to give chance to new dynamic, young faces. G.A.Mir

says youth getting inspired by the bold voice, vision of Rahul Gandhi.

Reviewing current situation and organizational affairs and activities in Kupwara & Baramulla Districts today AICC I/C (J&K) Rajni Patil has blamed Centre Govt for ignoring the aspirations of the people, advising it to take effective measures to address the genuine needs and other developmental issues concerning people.

Patil also urged the BJP Govt to keep its political agenda aside, take effective measure to address economic crisis, unemployment and other developmental issues in J&K.

Addressing impressive public meeting at Patushai in Lolab today, Rajni Patil expressed dismay over the current situation in J&K, maintaining that there is confusion to be seen on the ground due to the policies adopted by the Centre towards J&K.

people are feeling disappointed  with the BJP Govt’s indifferent attitude towards their problems and other developmental issues, the promises and tall claims made by the BJP Leaders and Ministers from time to time with regard to development of J&K  especially after 5 August 2019 have fall flat, which is indicative of BJP’s dual faced politics based on lies and deceit.

Patil asked BJP  led Centre Govt to be sincere towards J&K people and take effective measures to address their concerns without  indulging in any kind of discrimination, as that, people of Jammu and Kashmir have suffered enormously since 1989 in on way or the other, besides the people living in borders are still witnessing ugliest situation, despite various hardships  their heart beats for the Nation reflecting their patriotism and true nationalism.

On this occasion, Patil asked the Party cadres across J&K to vouch for strengthening the Congress Party further in every block and District, putting a united face to ensure that challenges ahead are defeated in unison.

She described the Party as supreme and said individuals doesn’t matter, so every Congress leader and worker should feel duty-bound to work to strengthen the  Party and follow discipline in both letter and spirit.

Addressing the party workers JKPCC President G.A. Mir stated that dynamic and young faces across J&K are coming forward to join Congress party after getting inspired by the bold voice  and vision of Rahul Gandhi, who is vigorously fighting against the political exploitation and wrong policies of the BJP responsible for the economic crisis, rising unemployment, unprecedented price hike.

Mir also hit out at the Centre Govt for unprecedented price hike on petrol, diesel, cooking gas and other essentials and asked it (Centre) to wake up and roll back the prices, rather than shifting blaming to others.

People are feeling harassed by tax terror and unprecedented price hike, at the sametime, they realize that BJP Govt is looting them to recover the losses it has done to the Country’ economy by misrule and mismanagement of things since the day one by enacting different baseless and concocted stories, as a result, there is a restlessness  across the country.

On this occasion G.A.Mir told the workers that young faces are coming to join the Party will be given chance to work, as the Party is committed to fully empower youth in both political and social fields, he added.

JKPCC Vice President Haji Abdul Rashid while speaking on the occasion termed the Congress Party as people’s voice with the legacy of serving and strengthening people of all shades and religions equally, while having never discriminated with any section of people living in the Country.