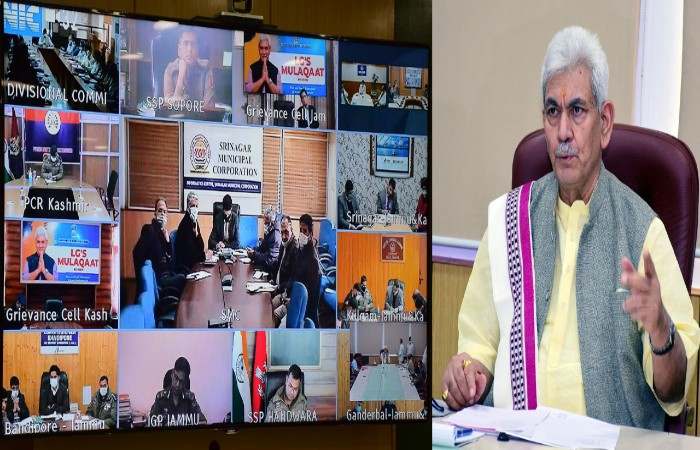 The Lt Governor, in his interaction with the officers, set out the agenda of establishing a transparent, accountable, and citizen-centric governance system right from the tehsil/block level to the district level.

The Lt Governor exhorted them to be sensitive and responsive to the problems of citizens and put in their best efforts to mitigate the same.
“Your efforts should be to redress genuine grievances at the earliest. Hold grievance redressal interaction with people at least three days a week”, the Lt Governor asserted.

Terming Block Diwas as an important administrative intervention, the Lt Governor called upon the officers to use this platform optimally for service delivery and alleviating public grievances. He also instructed the visiting officers to chalk out rational plans for Block Diwas programs in big districts and audit the grievances received and settled.

In view of the upcoming Shri Amarnath Ji Yatra, the Lt Governor directed the Deputy Commissioners to construct fully functional toilet complexes at prominent places in all the districts through which the Yatra passes, within the next two months. He called for synergizing the inter-departmental efforts to provide the best in class facilities to the visiting yatri’s.

The Lt Governor, while reviewing the activities under the “Azaadi ka Amrut Mahotsav’, asked the district officers to identify people from their areas who have played an important role in the freedom struggle and felicitate them in the ongoing celebrations. He also directed the officers to ensure the hoisting of the National Flag on all government buildings and establishments under their jurisdiction following proper protocols and laid down procedures.

Noting that use of technology is one of the fundamental aspects of good-governance, the Lt Governor reiterated that the websites of all government departments and agencies must be updated dynamically with important information for people in the most user-friendly way. The Lt Governor also instructed the district officers to make tangible efforts towards implementation of the e-Office system at the district level.

The Lt Governor directed the officers to fix the list of works identified under the Back to Village program, and those which have been completed at conspicuous places across all the Panchayats for the information of people.

Regarding One District One Product scheme, the Lt Governor noted that the onus is on the district officers to identify the relevant product from their areas so that the efforts for development of framework for value chain and alignment of support infrastructure can be taken up subsequently.

The Lt Governor also directed the district officers to lay specific thrust on development of playfields in Panchayats, identification of beneficiaries under the MUMKIN scheme, implementation of Forest Rights Act, developmental needs of border villages, implementation of Jal Jeevan Mission and removing illegal encroachments on the state land.
Meanwhile, during the review of COVID-19 management and control efforts in J&K, the Lt Governor directed the officers to ensure that COVID-19 appropriate precautions are taken by people in their respective jurisdictions. He also instructed the officers to achieve 100% coverage under the Ayushman Bharat -SEHAT scheme, besides making serious efforts to ramp up the vaccination in their respective districts.