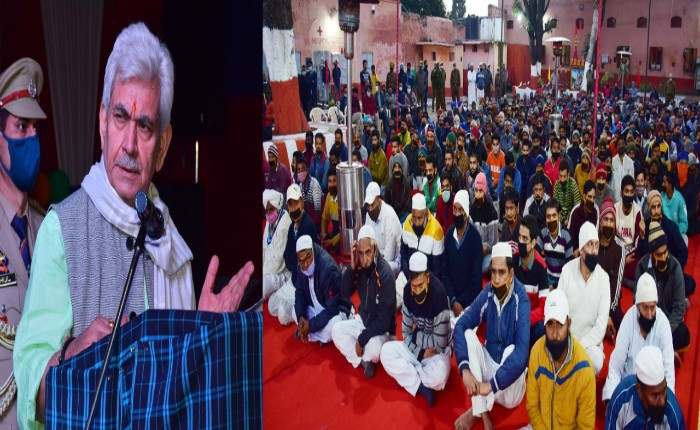 Calls for spreading Mahatma Gandhi’s ideas of truth and non-violence in the jails of Jammu and Kashmir
LG stresses on taking comprehensive reformative & corrective measures; appreciates Prisons department’s initiatives for skill development of inmates
• LG inspects interview room & product display unit
• Portrait of Mahatma Gandhi made by an inmate of District Jail Baramulla was presented to the Lt Governor

Jails have changed into correctional centres from punishment houses, with the initiatives and reforms done for correction of the inmates. The inmates must lead a positive life by imbibing the values of truth and non violence in their life and contribute to the society.

These remarks were made by Lieutenant Governor, Manoj Sinha while attending a cultural evening on the eve of Republic Day at District Jail, Jammu.

Speaking on the occasion, the Lt Governor called for spreading Mahatma Gandhi’s ideas of truth and non-violence in the jails of Jammu and Kashmir. These experiments are also being done in foreign jails and there are examinations and speech competitions along with studies on Mahatma Gandhi’s ideas. This has changed the lives of the inmates there. We can start this experiment from the Republic Day itself, said the Lt Governor.
Stressing on taking comprehensive reformative and corrective measures, the Lt Governor appreciated the Prisons department’s initiatives for skill development of inmates.

All jails must effectively implement the principles of Custody, Care and Correction so that inmates can lead a positive life and contribute to society afterwards, said the Lt Governor. It is also the responsibility of jail administration that Organized Criminal Activities in prisons are completely checked, he added.

While speaking on the reforms in prisons system and related human resource management, the Lt Governor observed that during the last few decades, a number of reforms have taken place in our country.

He further said that on the instructions of the Hon’ble Prime Minister, Narendra Modi, necessary reforms were made in 2016 and a Modern Jail Manual was prepared. The government’s objective behind this was that the jails be converted from punishment houses to a place of reforms and corrections, he added.

On making improvements in raising the standard of living of inmates, ensuring the safety of women inmates and their children, the Lt Governor said that committed efforts are being made to ensure that the prisons are modernized according to the changing circumstances of the time.

The Lt Governor congratulated the DGP Prisons for commendable work done in setting up of video conferencing, capacity enhancement of jails, modern interview rooms in about 11 prisons and treating those who suffer from mental trauma properly with the help of psychologists.

He appreciated the efforts made by the prison authorities for welfare of prisoners and initiatives taken during the COVID-19 pandemic. He encouraged the inmates to make best utilization of their time in prisons by acquiring skills available in the prisons so as to be able to contribute as responsible citizens after their release. He lauded the inmates who performed during the function and complimented the trainers and staff of Prisons Department for their efforts.

In December, in the Mann Ki Baat program, the Hon’ble Prime Minister mentioned the work done by inmates of Kaushambi District Jail in Uttar Pradesh for making protective coats from jute bags and torn clothes and distributing them in the nearby cowsheds so that animals can be protected from cold, observed the Lt Governor.

The Lt Governor remarked that “Today we all witnessed music talent of inmates. Apart from this, vocational courses are also being run here for skill development of inmates, which is commendable. The revenue generation of different products created by the inmates last year was around Rs 18 lakh. In the coming times, it can be given a more elaborate form, he added.