Macabre celebration of death of Jhelum 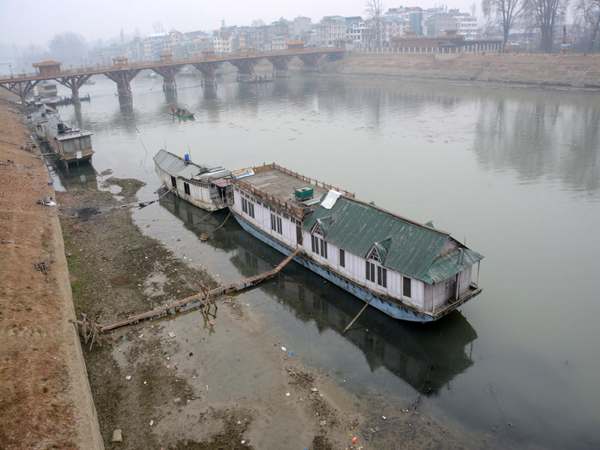 There was a deafening noise in the  Central Hall of the  state legislature  by the opposition  parties protesting against  what they believed  the PDP-BJP  government stood for , but  not even a single thought was spared for  a huge  crisis  staring at the 12.5 million people of the state-  catastrophic water crisis . The rivers in the state are dying and  there is no  way to revive them because of the nexuses  of various kinds .

Jhelum river is  having the lowest water level. The river  is lifeline of Kashmir Valley and  many parts of Pakistan and it is  facing a crisis of its own existence because of the low rainfall  during summers,  and a prolonged dry spell. These are the major issues that should concern each and every one in the state, particularly the Valley. Much of the irrigation of the agricultural fields , livelihood for fishermen , attraction for the tourists  comes through the  river.

It is  an easier explanation  to say that the  river is facing consequences of the global climate change . True, when the   glaciers are melting and the Antarctica is  losing its identity  with melting of the frozen masses , Jhelum and Kashmir cannot remain  untouched .  The snowfall is alarmingly low and with much less water content than what it used to be few years ago.

But there are some other very serious issues to which we have shut our eyes. The ruthless encroachment of the river bed  from Verinag to Uri in the Valley before the river falls like a waterfall to Pakistan occupied Kashmir.  Tree lines that were  holding the rain water  and snow  are vanishing – a grand result of the  human greed. 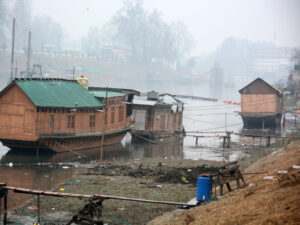 Kashmir needs to answer something more than that . It has been  seen  for the past nearly three decades that how the  threat of guns was used to  wipe out the forests . Timber smuggling, like the encroachments , is the best business of the unscrupulous elements during the period of disturbances . It has  been so greater  since 2008,  followed by  2010 and  the  just ended 2016.  The whole climate has changed . There is a need to study the impact of the petrol bombs, grenades and the  pellet guns  on the environment , which , tragically,  is more  than the losses that have already been inflicted on the people  in the troubled Kashmir.

Indeed there is a nexus  at all levels, between the politicians ,  encroachers , smugglers  and others , but  all this gets a natural shelter and excuse when the agitation erupts .

In 2016,  the timber  smuggling was at its peak, encroachments were made  behind the shied of stone throwing. The clashes between stone-throwing protestors and forces  took away the attention of the authorities from their original priorities . The “ resistance” movement or the law and order situation relegates everything to back ground. Search for the  normalcy  results in  blindsiding of the loot of jungles and stealing of the  water bodies for the construction of residential quarters and  commercial establishments .

Slogan shouting and protest  against “ killings” and political attention is  a democratic right of the opposition , but when it  becomes a disruption, the things become difficult to tame the forces stealing our water bodies, loot of jungles . The drying up Jhelum is not a wake up call. The disaster is  staring  at us  and  there are forces courting more of it.