Manoj Sinha set to neutralize threats to security in J&K 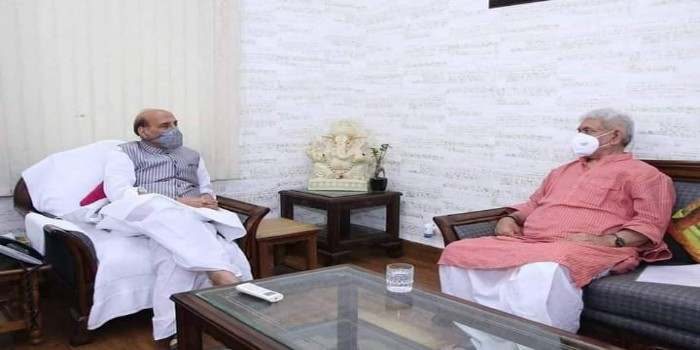 The meeting of Lieutenant Governor Manoj Sinha with Defence Minister Rajnath Singh ion Saturday evening dwelt upon the burning issues of Pakistan’s intensified activities along the Line of Control and also amplification of the propaganda from across to instigate the youth on the path of militancy.
Days before this meeting , Manoj Sinha had met the army chief M M Naravane and local commanders in Jammu and Kashmir to get a clear picture of the situation at the LoC and hinterland and its new dimensions.
Though it is not known as to what exactly was discussed between Sinha and Singh last evening , but it did show that the Lieutenant Governor had his concerns about the situation that he shared with the Defence Minister , because the internal and external situation of J&K is crucial for the development and empowerment of the people he wants to do in the Union Territory.
Manoj Sinha is aware that repeated violation of the ceasefire by Pakistan army at LoC, targeting the civilian population is bound to create a situation where the developmental activities would get affected. That, in, turn, would divert the attention of the administration in attending to needs of relief and rehabilitation of the civilian population. These needs have sharpened as there are not enough bunkers to shelter them from the shelling from across the LoC. The construction of more bunkers is a necessity.
There are two dimensions of the LoC situation that Manoj Sinha is reported to have discussed with Rajnath Singh- the flare up at the LoC is also a long-used strategy of Pakistan to push in infiltrators and weapons, and that is what it is doing yet again. The additional factor is China’s backing to Pakistan to disturb J&K as much as possible .
The infiltration and the dropping of weapons through drones in the border areas prompts the radicalized youth to choose militancy as an option . This replenishes the cadre of militants and also adds a serious dimension in which the local youth get involved in noticeable numbers. That is what , Pakistan uses as a cover to hide its own role by saying that the whole thing is “ indigenous.”
With his discussions with the Defence Minister, the J&K Lt. Governor has sensitized the Centre about the new concerns and also the ways to neutralize the new dimensions of the threats , for these not only divide the attention of the government from its agenda of development but also present a picture of the place being disturbed.
Manoj Sinha wants to lead the fight in neutralizing these threats to ensure that the development of J&K doesn’t suffer any disruptions prompted by Pakistan .

Govt committed to restoration of statehood to J&K: Amit Shah