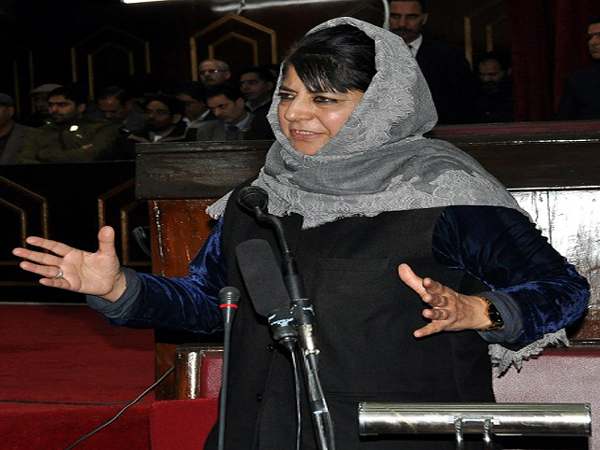 After announcing ex-gratia to victims of latest unrest in Kashmir the Jammu and Kashmir Chief Minister Mehbooba Mufti does so for Amarnath agitation victim of 2008 and also to kin of Chamail Singh.

The Chief Minister said  a large number of those killed, blinded, injured or affected in any way during unrest in the Valley belonged to very poor families and many of them were orphans who had nobody to guide. As such the rehabilitation of their kin or these injured lies with the Government, she said. “I announced setting up of Special Investigating Teams to probe these killing besides announcing the ex gratia”, she informed the House.

Mehbooba Mufti said on a similar pattern, victims of Amarnath land row in the State during 2008 would also be paid ex gratia and other financial compensation. She said, similarly, the kin of Chamail Singh, a civilian from Paragwal area of Jammu province killed in Pakistan in 2013, would also be duly compensated. She said her Government won’t differentiate on the basis of caste, creed or colour when it comes to the rehabilitation of its people.

The Chief Minister said only 138 persons are detained by police for questioning and 370 persons are booked under Public Safety Act whose status is being reviewed on case to case basis. She said she has directed not to re arrest a person in whose favour the court has quashed the detention but take his parents into confidence while counseling him to shun the path of violence.

Chief Minister, Mehbooba Mufti today asserted that strengthening of democratic system in the State holds key to the resolution of many issues of Jammu & Kashmir even as she maintained that Article 370 not only grants special status to the State but secures its pluralistic ethos as well.

Winding up the discussion on Motion of Thanks on the Governor’s Address in the Legislative Council today, the Chief Minister said the present composition of the State Legislature is unique as it represents every shade of opinion from every region of the State. Also the Government at the Centre has a huge mandate of the people of the country, she said and added it provides an opportunity to move ahead in one voice and get many of the issues confronting the State resolved. “To unbundle the knots of uncertainty we need to strengthen this democratic system”, she added.

Mehbooba Mufti appealed the members to rise above party lines and work to minimize the mistrust and discord between regions and people in the State. She said the need of the hour is that Jammu & Kashmir remains united as a single entity so that it approaches the issues confronting it with singular attention and focus. She said this was the biggest objective with her party while forming Government in the State in 2015.

The Chief Minister said ‘Agenda of Alliance’, which lays the basic framework of governance for the present Government, encompasses everything which has been thought of for the State.  She said the AoA is blue print for resolving the problems of the State in a multi stage manner.  She said dialogue is a universally accepted mechanism to resolve disputes and issues and her Government is keen to initiate political process in the State for which she asked all shades of opinion to help.

On the special position of the State in the India constitution, the Chief Minister said Article 370 is not any other entry in the rule book but it has to be understood in depth and with perspective. “It’s not only about securing the geography of Jammu & Kashmir alone but the pluralistic ethos and cultural diversity of the State as well”, she said while stressing on further strengthening the said position thereby further improving the relations between the State and the Centre.

Mehbooba Mufti said unique examples of this pluralistic ethos were witnessed during the unrest of last year when despite curfew Amarnath yatries injured in an accident were rescued and treated by local people, a Pandit marriage was solemnized by Muslim neighbors when nobody could dare to venture out or when many of Kashmiri parents sent their wards to Jammu for studying. She appealed members to play their role in strengthening this ethos.

Mehbooba Mufti said her Government would value the criticism and suggestions of the opposition so that the governance system is further fine tuned in a collective manner.