Mehbooba will  have no rethink on  compensation to the stone throwers 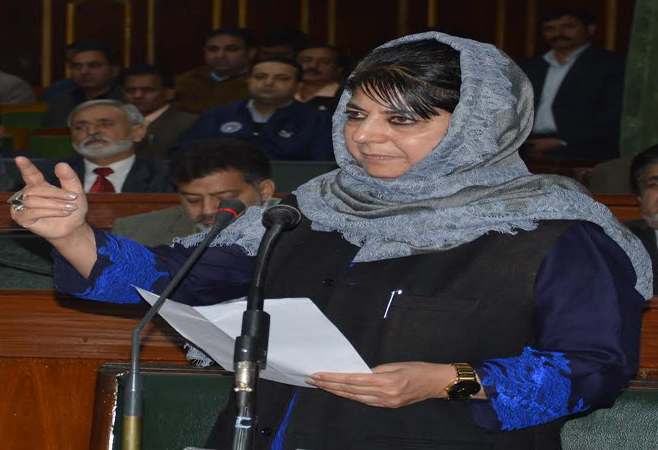 Jammu, January 16 ( JKNT)  Chief Minister Mehbooba Mufti has told  Deputy Chief Minister Nirmal Singh  that under no circumstances she would  change her stand of  compensation and jobs  for the families of  those killed in clashes with security forces  during five month long unrest in Kashmir.

She was unhappy the way  BJP leaders were raising hue and cry and trying to paint  PDP as sympathisers of the  terrorists . There were reasons for the unrest and the young children were used as shield by the vested interests to cause a violence- dotted situation , therefore there is a need for  a humane approach and not a technical  one in dealing with such sensitive situation ,” she is reported to have told the Deputy Chief Minister.

Chief Minister had announced  an ex-gratia relief to the each of the stone thrower killed in clashes with security forces. She had also promised a job to family members of such victims and  also those who lost eyesight .

Sources told  J K News Today that  Chief Minister has declared that there would be no rethink on the matter .

BJP leaders are  unhappy but they are  going by the compulsion  of staying in power at any cost . The  party ministers are  not in favour of making this as an issue with the PDP .

The party high command busy with the elections in five states- Uttar Pradesh, Uttrakhand, Manipur, Punjab and Goa-   is maintaining its silence on the issue, while during the unrest it had described the stone throwers working for money and at the behest of Pakistan .

Jammu region that had given an overwhelming mandate to the party in the 2014 Parliamentary and Assembly elections  are feeling cheated  for the party neither has fulfilled its ideological commitment nor has brought  any major developmental issue  to the fore.