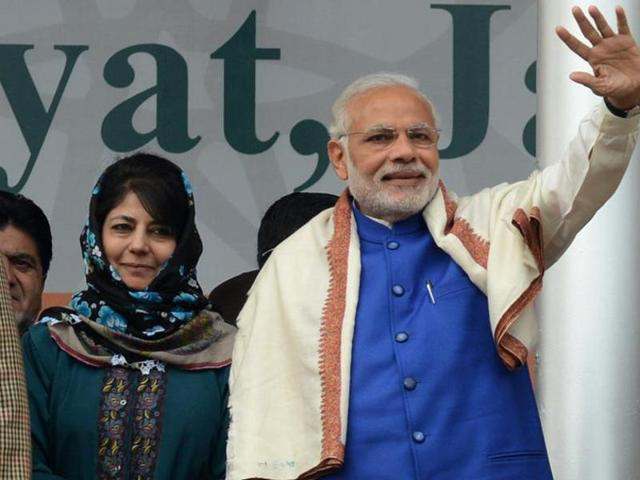 NEW DELHI, NOVEMBER 28 ( JKNT)  Chief Minister, Mehbooba Mufti called on Prime Minister Narendra Modi here on Monday and urged him to announce  a special package for  the victims  of Kashmir unrest for the past few months.

Chief Minister pleaded that “ reaching out to the people in Kashmir is the need  of the hour. Her  plea was that  a specific package for the  suffering people would heal their wounds and deliver long term  dividends.

Mehbooba Mufti , who, soon after becoming the Chief Minister .   faced  violent  fallout of the killing of the militant leader  Burhan Wani in   July, is reported to have told the PM that  this was the time to  reach out to the people. She claimed that the people have started  shedding their violent protests and  shifting toward  normal life  need consolidation and encouragement.

An official handout, however, said that  the  Chief Minister highlighted the need for reaching out to the people of the State and taking various tangible initiatives in this regard.

Mehbooba Mufti also underlined the urgency of taking Jammu & Kashmir specific Confidence Building Measures to address the concerns of the people of the State.

The Prime Minister was supportive of the ideas of the Chief Minister and assured her all support from the Central Government.

The Chief Minister also brought into the notice of the Prime Minister the demand for additional funding for Mufti Mohammad Sayeed Food Entitlement Scheme (MMSFES) in view of the huge number of beneficiaries living in far flung and border areas who have not yet been able to take benefit of the scheme properly.

Mehbooba Mufti also requested for a central package of incentives for industries in Jammu & Kashmir given the fact that business activity in the State remained extremely low during this summer. She also sought 50% quota in All India Services for the officers of J&K cadre.