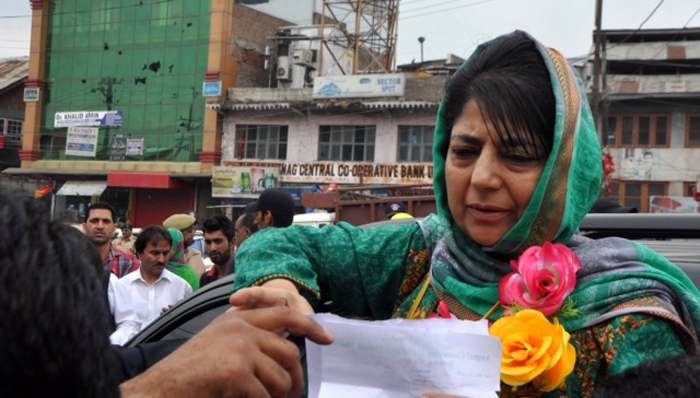 Imagine the emotions that’ll overcome a boy who sees his brother’s mutilated and charred body. Would you be surprised if he picked up a gun, the former CM asked.

Mufti said this while talking to reporters on the side-lines of a campaign rally in south Kashmir’s Shangus area.

“Every human, even a militant deserves dignity after death. Armed forces use of chemicals in encounters disfiguring their bodies is inhuman. Imagine the emotions that’ll overcome a boy who sees his brother’s mutilated charred body. Would you be surprised if he picked up a gun?” Mehbooba tweeted soon after the interaction.

The forces in Kashmir have been accused of using chemicals a number of times but they have rejected the claims.

As per Geneva Protocol use of chemicals in armed conflicts is prohibited. Srinagar-based Army spokesperson has not yet responded to the statement.

The bodies of a number of militants were mutilated when Mehbooba Mufti was the Chief Minister of J&K and was head of the unified command—which includes all the wings of forces operating in Kashmir.

Reacting to the statement, National Conference (NC) has said that this is a serious issue and Mufti should explain her statement.

“This is a serious issue. Mehbooba Mufti was heading the forces, she must have made the statement due to some reason,” said senior NC leader Ali Mohammad Sagar. “Were chemicals used when she was Chief Minister? This should be explained by her,” he added.

BJP leader Kavinder Gupta, who was the deputy Chief Minister in the BJP-PDP alliance government, termed the statement as bizarre.

“She was the chief minister of the state when major operations against militancy were launched. She must know better about whether chemicals were used,” Gupta told News18.

Terming the statement an election gimmick, he said that it was another attempt to stay in the news as she has lost the support of people.

News18 reached to PDP leaders, but they refused to comment. A PDP leader, on the condition of anonymity, said that Mehbooba Mufti issued the statement after receiving proper reports.