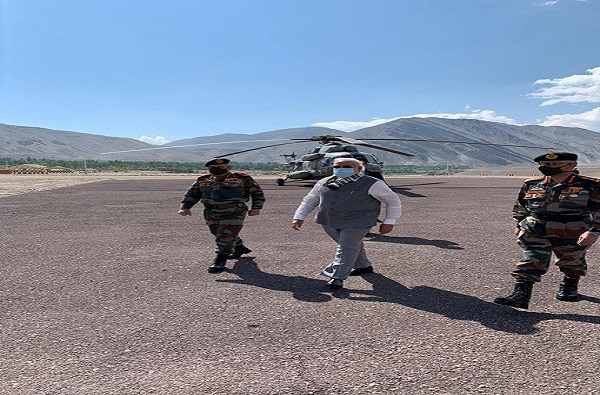 On Friday-July 3 – Prime Minister Narendra Modi delivered a strong message to China from Nimu in Ladakh, that the “age of expansionism is over,” and with this he tagged another message, “it is the age of development.”  And, on Monday Chinese troops started pulling back from an aggressive stand-off position from some of the areas in Eastern Ladakh, which made it clear that China had heeded PM ad understood import of his words.

Modi had come under attack from his critics over his handling of the situation in Eastern Ladakh, his silence was questioned. There were heavy notes on his foreign policy and everything else that he had attempted to do to avert a bigger crisis. His critics were ruthless, but he had confidence in himself and the administration.

The confidence was reflected on Monday when Chinese troops started moving back with all their paraphernalia from Galwan Valley and other places. This, of course, is the beginning and drawing early conclusions would be premature. These situations necessitate perseverance and patience. But the beginnings do have an end.

Today’s developments in Eastern Ladakh , the strategists feel , should be seen against the backdrop of Modi’s visit on July 3 , when he  said it all that messing up with India would be inviting Indian fire and fury . The martyrs of Galwan valley had inflicted much heavier casualties on Chinese troops and they had sent a clear warning that no trespass of any nature would be tolerated. They paid the cost by losing 20 men, but the extracted a very heavy price from Chinese.

Why, the whole turn of events within three days of his visit should be credited to the P M. He came to the frontline region to be with the nation’s soldiers, salute their bravery and commitment. He had hailed their bravery and determination by acknowledging that their “valour of much higher degree than the heights where they were posted.”

Soldiers knew it instantly that the Prime Minister who represents the nation by his political mandate a also his place in the hearts of the millions of people across the country , including those who were unable to vote for him  in 2019 polls , was with them . He was standing with them. This turned around the situation as Chinese could comprehend that the Indian soldiers would be more lethal if there was any repeat of Galwan valley type clash.

When that message was driven home, Chinese troops started returning to the points where they were expected to be. Today, they might have retreated by one Km, but tomorrow holds the promise of their withdrawal being complete.

Modi magic has worked in Ladakh.