Monetary Stalinism, Perils of tinkering with jameen, jorru and jeb 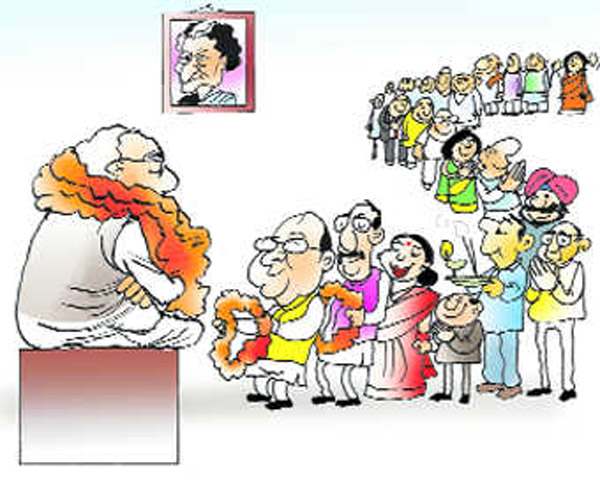 We do not want another ‘god’ as the political leader of our country… We must not only not have any more gods…we must also ‘devalue’ the exaggerated importance that we have given to the office of Prime Minister.”  The author of this wisdom lies gravely unwell in a nursing home in New Delhi. Much before old age and its attendant infirmities took their toll, this man used to articulate — on behalf of the BJP — wise propositions of good governance and democratic accountability. His name is Jaswant Singh, the most suave, educated and responsible minister in the Vajpayee era.

Jaswant Singh had made this formulation in 1987. That was the age when the Prime Minister had more than four hundred seats in the Lok Sabha; he also had a majority in the Rajya Sabha. He had a shouting brigade who would keep the presiding officers in check; he had an officer in the PMO who would publicly deride Opposition leaders as “cretins”. That was the age of prime ministerial supremacy and it produced many unmitigated national disasters.

Let us dig a little deeper in history. The year is 1971. The legend has it that  the legendary soldier, Sam Manekshaw, told off an impatient Prime Minister Indira Gandhi that he would not  be prepared for “action” in  East Pakistan till he was satisfied that adequate preparations had been made  and logistical wrinkles sorted out. The Prime Minister had the good sense to heed the sound advice of a sound officer, and lived thereafter to see the Indian armed forces settle Pakistan’s hash.

These glimpses from the past are being recalled to reiterate the lessons the recent history has taught us. And, the unambiguous lesson, from 1975-77 onward, has been a cultivated distrust in the idea of an omnipotent Prime Minister and his overweening ambition. Beware of a too powerful Prime Minister. India is too vast a country to be at the mercy of a Prime Minister and his wisdom.

The demonetisation mess painfully brings home the correctness of Jaswant Singh’s caution against elevating a leader as “god” who must be rendered unambiguous obedience and obeisance. The utter incompetence in implementing the “demonetisation” drive merely underlines the total abdication by the Reserve Bank of India of its institutional autonomy and voice. The RBI Governor was duty-bound to tell the Prime Minister to slow down, just as General Sam Manekshaw once told another Prime Minister. The country is a daily witness how the Finance Ministry officials are encroaching upon the RBI’s institutional space and making a mess of it.

This is incongruent. Here is a regime — whose senior-most impresarios take considerable pride in micro-management and have built up a formidable reputation in Gujarat as control freaks — which was so callously inattentive to the post-demonetisation dislocations. The very arbitrariness and the resulting chaos are being sought to be palmed off as “worth the pain” because Prime Minister Modi “means well”.

No one is sure to what extent the Finance Minister, leave alone the rest of the Cabinet members, were privy to this so-called “surgical strike” on black money. The country remains in the dark as to whose counsel the Prime Minister sought while firmaning this most drastic and draconian change in currency notes. Not since Morarji Desai’s gold control (in the wake of the Chinese aggression ) order has any other single governmental initiative touched the lives of so many Indians. Yet the collective thinking and collective decision-making appear to have been done away with.

This unhealthy concentration of power and authority in one man can only be a recipe for unhappy consequences. Already the blue-book of personality cult is operational. Ideological, political and moral approval is sought for the Prime Minister and his “bold” move. Anyone disagreeing with the Leader is being called a habitual dissenter, a fake secularist, and a potential “deshdrohi”. Anyone dissenting is dismissed and ridiculed as an accomplice of the corrupt and the terrorist. The officials down the line have interpreted this kingly intolerance as a simple licence to shut people up. For example, in Indore, the local officials have outlawed any criticism on the social media of the demonetisation decision because they think “internet social media wars” could disrupt social peace. The Leader can disrupt the daily lives of the millions and millions of citizens but no citizen can have a right to share his/her plight or vent anger about being denied one’s own money. On the other hand, the Prime Minister’s Office uses the very social media to conduct an “opinion poll” of its own and claims wide public approval for the demonetisation move.

Why was one individual — however popular, wise, and honest — allowed to undertake this experiment in monetary Stalinism? Collectivist impulses of the State have been let loose. Millions and millions of households have been forced to surrender their meagre savings to the banks. The mopped-up savings will now be available to the Omnipotent Sarkar, to be dispersed as per the preference of the ruling clique. If Stalin could force the Soviet citizens to donate their labour for industrialisation and for the glory of “motherland,” we can also force our people to cough up their hard-earned savings to fight off the evil Pakistan. The minatory penetration of a Leviathan State is complete and total even in the remotest part of the land; each day the State issues firmans on how much and how a citizen can use his own money. All because the Leader wanted to be “bold” and to “transform” India, like no other Indian leader had done these last 70 years.

In the best of the Stalinist traditions the (virtual) mobs are being encouraged to denounce anyone who dare question the ruling regime’s preferences and priorities. We are manufacturing new orthodoxies: any governmental initiative-good, bad or malevolent — will not be questioned if it is declared to be in aid of fighting “corruption, black money, terrorism and counterfeiting of currency.” It is demanded of the citizens that they put up with the “inconvenience” in “our fight” against these presumed objectives. As in Comrade Stalin’s days, endorsements for the regime are expected. Expectedly, the venerable Ratan Tata has led the chorus of approval. Just stand up and applaud.

A wise king was always advised to leave his subject unmolested of his two possessions — jameen (land) and jorru (womenfolk).  Rulers, democratic or authoritarian, have faced most primaeval resistance whenever they have sought to take liberties with their citizens’ land or women. Now, we have witnessed a new experiment with a democratically elected king putting his hand in the subject’s jeb (pocket). Consequences will be there.