Leaving behind the months of unrest, Jammu and Kashmir is going to start a massive tourism promotion campaign across  India and in foreign countries to attract visitors and present a positive outlook of the state.

“We will overcome the scars of unrest on tourism sector as Jammu and Kashmir is best tourism destination in the country offering vast variety of tourism related products which has huge potential,” said Farooq Ahmad Shah, Commissioner Secretary to J&K government, Tourism department in exclusive interview to JK News Today (jknewstoday.com) 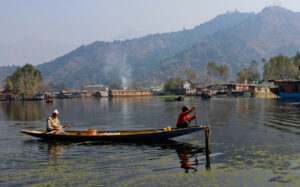 Government has planned to hold 20 road shows in major cities and metros while state will participate in different travel marts in foreign countries including Malaysia, Singapore and Thailand and also Middle east, in a big way during the upcoming months. Tourism department is going to launch a big publicity campaign to increase tourists’ and pilgrim tourists’ footfall

Known for his administrative skills and visionary approach,  Shah during the interview revealed the future plans of the government to create world class infrastructure in Jammu, Kashmir and Ladakh to allow visitors to enjoy the scenic beauty of the  Himalayan state.

“J&K has been gifted by the God with breathtaking scenic beauty and water resources which need to be harnessed judiciously for tourism promotion. Despite unrest and other factors J&K is still favourite destination for the people across the country”, said Shah. He said that state has everything to offer in terms of pilgrim destinations, scenic spots and distinct heritage.

He said that Tourism Department is making every effort to create a positive image of the state and roads shows, seminars and taking part in travel marts is an important aspect of our efforts.

Secretary Tourism said that till June this year, state was most favourite destination for the visitors but the unrest in Valley led to cancellation of books which affected the sector. “Our vigorous campaign has led to resurgence of tourism in Kashmir valley during 2015 and the efforts supplemented by private tourism stakeholders has resulted in increase in arrivals of people from across the country  (which was three times as compared to previous years) but unrest led us to lot of problems”, said Shah.

About future plans of the department and J&K government, Shah said that the infrastructure would be developed in an eco -friendly manner at all the tourist destinations so that the ecology and environment issues are taken care of while promoting tourism in the state.

He said that attracting the pilgrims visiting the Mata Viashno Devi Shrine to other places will definitely give a fillip to the tourism sector and the economy of the state.

Farooq Shah said, “The Chief Minister, who hold the Tourism portfolio has directed the concerned agencies to keep road connecting to Tourist spots in good condition.”