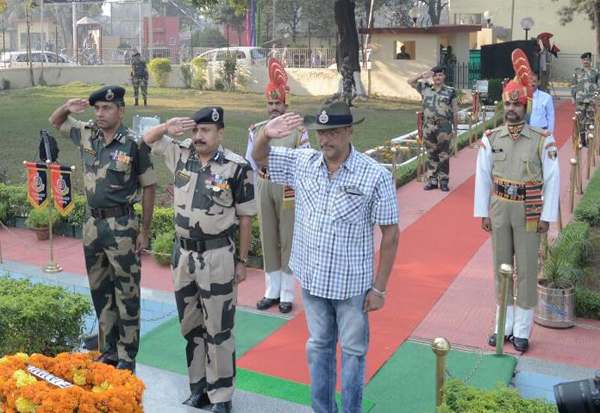 On the second day of his tour, Bollywood actor Nana Patekar said that he felt humbled by courage and commitment of Border Security Force (BSF) soldiers deployed on International Border (IB) and Line of Control (LoC) in Jammu and Kashmir.

While paying homage at martyrs’ memorial at Frontier Headquarters of Border Security Force (BSF) Jammu, Patekar said that visit has made him 16 years younger and would like to come again and again to  stay with troops at border.

Actor who was on two days visit to Jammu got emotional and said that BSF duty posts at International Boundary where they remain present day and night throughout the year are like temples for him and having visiting them he felt purified.

He expressed his heartfelt respect and regards for all the security force personnel who fought and made their supreme sacrifice in the service of motherland. The actor also met the parents and relatives of Constable Gurnam Singh who died in Pakistani sniper attack on October 21 while defending the border against armed infiltrators in Samba sector on Jammu International border.

He visited BSF senior secondary school, Paloura camp and met teachers and students. The students were extremely happy after talking with their iconic film star who appeared in several Hindi films.

Nana Patekar also met BSF troops and their families deployed in Samba Sector. “I was surprised to see highly motivated BSF soldiers working in extremely difficult environment on the border away from their families”, actor said.

He said that BSF’s outstanding contribution to the security of our nation cannot be overstated. It is not an easy job, but one Bordermen do with dedication and resolve.   He said that unfortunately despite immeasurable contribution to the security and integrity of the country through out the year, BSF has not yet got the credit it deserves from us and he will do whatever is required to be done.