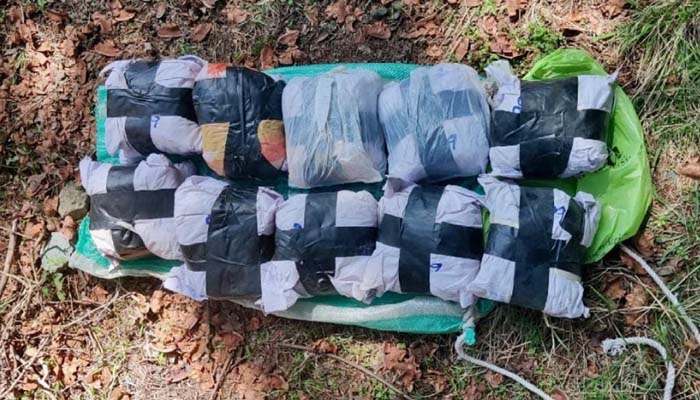 Alert security forces guarding the Line of Control (LoC) foiled an infiltration and narco smuggling attempt when they recovered 10 kg of narco estimated to be approximately Rs 50 crore on Wednesday, a defence ministry spokesman said.

This is the second consecutive busting of ‘Pak Sponsered Narco Terror Model’ in the past one week, Lt Col Emron Musavi said.

Incidentally, he said, a 10 KG heroin consignment was recovered from the same general area a week ago in a joint operation. However, he said, this time smugglers were spotted carrying the narcotics along the LoC.

Indian Army and BSF’s strong anti-infiltration posture denied the smugglers accompanied by Pak Based militants, the opportunity to cross the fence.

Lt Col Musavi said it further forced them to abandon their consignment and flee on being challenged. The operation to identify individuals of Karnah Tehsil involved in this activity was in progress during filing of this report.

Local sources have affirmed high likelihood of arrests of certain kingpins in upcoming days, he said.

This attempt of Pakistan to support smugglers with armed terrorists has exposed the nexus, he said adding Pak handlers controlling the nexus, get money in lieu of Narco supplied which is in turn used to fund terror organisations operating in Pak & Pakistan Occupied Kashmir (PoK).

He said Pak Army is a key stakeholder in this Narco-Terror nexus which involves using of civilians on both sides of the LoC as cannon fodder.

He said the modus operandi involves pushing the handlers and smugglers across the borders with an aim to exchange the drugs in lieu of money to support the militant organizations.

Parents and Civil Society in the past have been urged to play their role in strengthening their fight to combat the menace for the larger benefit of society. Pak’s nefarious designs has not only affected youth of J&K but also those in PoK who are actively involved in Narco consumption & smuggling, he said.