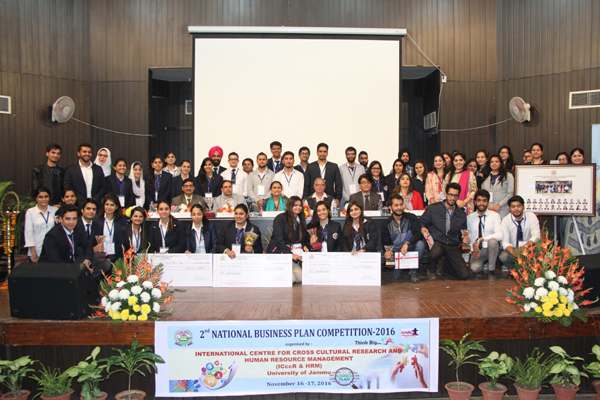 The second day of the competition began with the presentations of the business proposals followed by Mentoring Sessions by the industry experts. The sessions were conducted by  Raj. K. Nehru, appointed founding Vice-Chancellor of India’s First Skilling University, Vishwakarma Skill Development University, Haryana,  Khair-ul-Nissa, Director, WTC, Noida,  Imran Ahmed, Circle Head, J&K Ericsson,  Saheel Yaqoob Alaqband, Assistant Director (Metallurgy), MSME, J&K State and  Annil Suri, Vice President, Jammu Chapter, National HRD Network.
Professor Neelu Rohmetra, Director, ICccR & HRM, JU, moderated the Mentoring Sessions. According to her, the major focus of the second day of the event was to debate upon the need for developing entrepreneurial culture, the role of start-ups and igniting the will to take up initiatives which are institutional and entrepreneurial in nature to serve the communities at large. During the sessions, ample emphasis was on building character and pursuing business which has the element of integrity and honesty. She also informed that JKEDI, MSME and WTC have offered their support to promote the business ideas which shall have the potential to yield returns.

Raj. K. Nehru, during the training session, discussed the relevance of change in the lives of individuals.  Raj Nehru put forth the point that the problems of today unfold innovative business models and opportunities for tomorrow. He also discussed the recent steps of demonetisation. He acquainted the participants with SMAC (Social, Mobile, Analytics and Cloud) as an instrument for corporate practice for creating profitable and successful business models.

Khair-ul-Nissa, in her interactive session focussed primarily upon the indigenous industry opportunities that can be tapped within the State, as there is a huge market for the same across the world. She insisted that market analysis typically of the regions wherein one is located can be advantageous for resource generation.

Imran Ahmed, during his mentoring session highlighted the role of planning that is crucial for implementing the idea in real life. He shared examples of several business ventures which have successfully adopted the right strategic planning approaches to generate employment and profitability.

Saheel Yaqoob Alaqband, during his talk, laid emphasis on the Manufacturing Sector and highlighted how the knowledge amongst disciplines must be integrated for developing extraordinary business proposals. He also discussed about the MSME grants that can be availed for sustainable business functioning by the aspiring entrepreneurs.

Annil Suri, during the Mentoring Session elaborated upon the process and requisites for creating successful business planning and deliberated upon the relevance of acknowledging the strengths and weaknesses of oneself, logically thinking and the role of vision, dreams, values, emotions and honesty to pursue any business.
Towards the culmination of the event an impressive Valedictory and Prize Distribution Ceremony was held of the Competition which was presided by Professor Desh Bandhu Gupta, Dean Academic Affairs, University of Jammu.

Professor Desh Bandhu Gupta, Dean Academic Affairs, University of Jammu, during his presidential address congratulated the Organizing Team at ICccR & HRM for their enthusiasm. He also encouraged the students to channelize their positive energies into substantial outcomes that can make a difference to the lives of individuals.

Later, Professor Neelu Rohmetra, Programme Convener, while speaking during the prize distribution ceremony presented the overview of event held and thanked all those who had contributed towards its successful execution. She also thanked MBA (IB) alumni partner, Abhinay Sharma, owner of Sankalp Weddings, Jammu for his contribution as prize money sponsor.