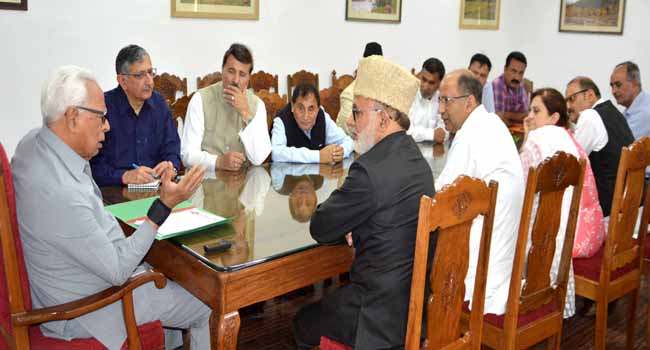 The delegation put forth its concerns relating to the legal challenge to the Article 35 A of the Indian Constitution; appreciated the decisions taken by the Governor for streamlining the Administration after the imposition of Governor’s Rule; raised issues relating to the security concerns of their Party members on account of terrorist attacks on its leaders and workers; growing menace of drugs among  youth; downturn in the tourism and handicrafts sectors of the State’s economy;  raised attention to the developmental issues of Srinagar city, particularly the urgent need for Dal Lake conservation; problems of Kargil District which included unlawful constructions, encroachments on public lands, and need to ensure timely completion of the Zojila tunnel.

The delegation thanked Governor on his decision to conduct the long overdue elections to the Urban Local Bodies and Panchayats. Governor urged Sh. Sagar and his Party members to raise awareness about the high importance of the forthcoming elections to establish grass-root democracy in the State.

Governor assured the delegation that he would schedule an early visit to Kargil to discuss and settle all outstanding problems relating to the district.