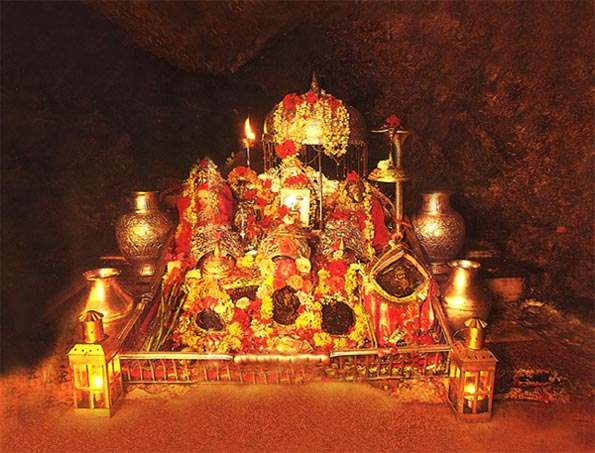 Navratras are the nine divine nights of a festival, dedicated in the honour of Goddess Durga. The biggest annual festival is celebrated at every temple of Maa Durga across the state. This Saturday if you are feeling yourself in the zone of being religious you can visit one of these temples around Jammu or make a day trip and visit all five.

To begin with cleanliness drive and decoration in entire Katra town on the foothills of Trikuta Hill to the 13 kilometer long track and holy Shrine, Shri Mata Vaishno Devi Shrine Board have prepared to kick start the 9-day long Navratra Festival from Saturday.

Additional Chief Executive Officer of Shri Mata Vaishno Devi Shrine Board (SMVDSB), Dr Piyush Singla, said, “Shrine Board along with Tourism Department and District Administration is ready to begin with the biggest event of SMVDSB, the Navratra Festival. All arrangements have been completed and we are ready to receive the pilgrims on the eve of Navratra festival.”

“All the security arrangement also have been in place and extra deployment has been made for the festival,” said Shrine Board officials and added, “All the necessary meetings have been done.”

As senior police and civil administration officials already mentioned that all the necessary security arrangements have been done for Navratras, the SSP Reasi, Sujit Kumar today reviewed the security and visited entire Katra town to have on the spot assessment of the security scenario. Along with police and para military personnel, the staff of SMVDSB is also active to provide safe journey to the devotees of Maa Durga.

Shrine Board said that there is capacity for 660 persons in the paid rooms, while 517 pilgrims in the open halls and other rooms, which are free of cost at the Mata Vaishno Devi Bhawan.

Similarly, heavy number of pilgrims today reached Katra and have started journey for the cave shrine and want to seek darshan of the idols of Maa Durga on the occasion of first Navratra begging from Oct 1 morning.

The over enthusiastic Kanishka from Delhi, Preeti and Manav from Delhi, Prathna from Indore and Dharmika from Mumbai told the JKNT that there is a myth that if one can have darshan of Maa Durga during Navratras, Mata Vaishno Devi will fulfill their all desires.

Meanwhile, Hotel Association of Katra already demanded to organize the coming Navratra Festival with much fanfare so that the tourist season would back to the state.

Hotel and Restaurant Association, Katra president Rakesh Wazir said that  keeping in view the sudden fall of tourism in J&K state due to sudden turmoil and to end the persumption from the minds of people that conditions are not normal in the whole state  the Navratra Festival this year can play a big role to bring back the tourists from different parts of the country.

The Kali Mata Shrine at Bahu Fort commonly known as Bawe Wali Mata is the most visited place in Jammu during Navratras. The shrine is considered to be second only to the Mata Vaishnodevi temple at Katra. Every day thousands of devotees from all over the state throng the temple to pay their obeisance to the presiding deity of Jammu and to soak in the spiritual aura of the region, but during Navratra festival, this temple also witness heavy rush of devotees from state and outside. All the security and other arrangements have been done on the eve of Navratras. SSP Jammu, Sunil Gupta personally visited and passed instructions to the security personnel to be alert, but also make smooth functioning of the pilgrimage for the devotees during these holy nine days.