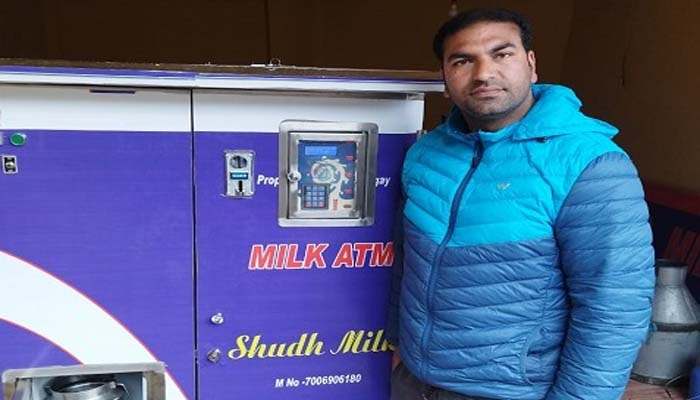 Shabir Ahmad Wagay, a young professional milkman from Pahoo village in south Kashmir’s Pulwama district, would incur losses amounting to thousands on a daily basis during summers as a good quantity of milk would curdle in transit from the south Kashmir district towards Srinagar during transportation.

While travelling to New Delhi for some work, Shabir saw milk dispensing machines in the city. The loss-afflicted businessman at once got the quick fix and on his return to the valley, set up the first of its kind milk dispenser in his home town in the south Kashmir district- the Milk ATM’.

Shabir said that after being depressed by the daily losses, he stopped supplying milk to the Srinagar city and confined his business in the nearby villages only.

But Wagay’s latest novelty in the town now serves fresh milk to every passerby in need irrespective of where he or she comes from.

The milk dispenser, which has a capacity to accommodate 500 litres of milk at once, was installed on Sunday March 7 and according to Shabir, the machine has dispensed more than 100 litres a day on an average since then.

The machine has an inbuilt ACMU (Automatic Milk Control Unit) which dispenses an accurate amount of milk as per the inputs given by the customer.

It is also fitted with a SNF (Solid Non- Fat) calibrator which checks the fat percentage in the milk and cautions if there is an excess of water or fat saturation in the milk.

As an inaugural day gesture, Shabir said he provided 250 litres of milk free of cost to the customers in a bid to let them first taste and check the quality of his product and then if satisfied, purchase it.

Shabir sells the milk at Rs 40 a litre and customers can pay through cash or a special card. But Shabir said the cash option has been disabled for now even though he hoped it would be resumed soon.

Shabir hoped that the ‘Milk ATM’ would ensure round the clock supply of milk in the area at a time when more and more people are shunning the domestication of cows.

Shabir further said that he deliberately chose the milk dispenser rather than switching to supplying the milk in polythene packaging, which he said, is harmful in many aspects.

“After emptying the packet, the polythene pollutes the environment,” he said.

He further appreciated the efforts of the local Animal Husbandry Department for providing him a Big Milk Cooler (BMC) which has the capacity of 2000 litres for storing milk.

Chief Animal Husbandry Officer (CAHO) Pulwama, Dr Mohammad Hussain hoped the new installation will be beneficial for both investors and the customers.

“Investors would not require moving around to supply the milk and would have no apprehension about the milk getting curdled. On the other hand customers will be able to get round the clock milk without compromising on the quality and the quantity,” Hussain said.

He further said the machine also has an inbuilt cooler which maintains the temperature of the milk at 4 degrees Celsius and extends its shelf life to three days.

Hussain welcomed more private investors on behalf of the Animal Husbandry Department to establish more such dispensers for the sake of entrepreneurship and job creation.

Hussain said the department provides 50% subsidy for the investors to install the milk dispensers ranging from 200 litres to 2000 litres capacity.