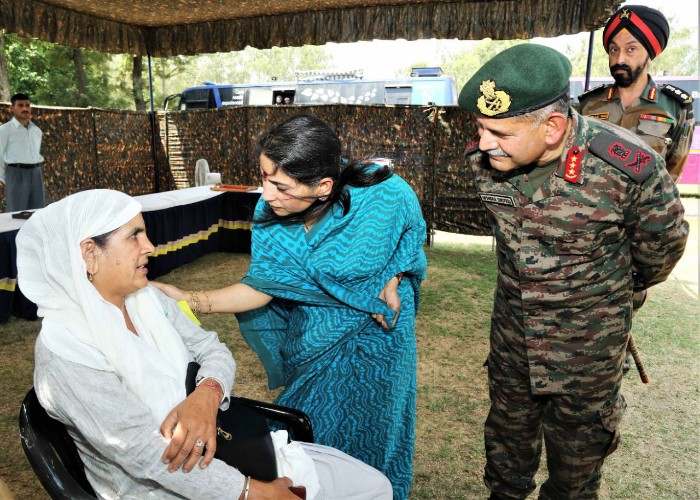 To honour the sacrifices and services of Indian Army Veterans and Veer Naris, an Ex-Servicemen Rally was organised by Crossed Swords Division of White Knight Corps at Akhnoor Military Station on 10 May 2022. The rally provided a platform to voice concerns on various policies affecting Veterans.

Lt Gen Upendra Dwivedi, Army Commander, Northern Command graced the occasion accompanied by Lt Gen Manjinder Singh, GOC, White Knight Corps, Maj Gen VS Sekhon, GOC, Crossed Swords Division and a large number of Veterans and Veer Naris. The Army Commander Interacted with the Veterans and Veer Naris and lauded the contributions of the veterans and serving soldiers towards the security and prosperity of our Nation. He emphasised on the Indian Army ethos upholding the highest traditions of valour and devotion to duty in maintaining the sovereignty of the country.

The event highlighted contributions of the local populace during the 1965 and 1971 Wars and honoured their sacrifices for the Nation.

Sunita Dwivedi, Regional President AWWA, Northern Command felicitated the Veer Naris and widows for their unflinching support and contribution as pillars of strength to the soldiers serving in far flung areas. The events were followed by interaction, medical check-up and grievances redressal of various issues. Nearly 800 Ex-Servicemen, 200 Veer Naris & Widows from far-flung areas of Akhnoor, Sunderbani, Jaurian and Rakhmuthi were present on the occasion. The event will go down as a memorable chapter in the history of Akhnoor Military Station, displaying personified bonhomie and gratitude towards the service of Ex-Servicemen for defending the territorial integrity of the Nation over the years.

Lt. Gen. Anil Chauhan to take over as CDS today