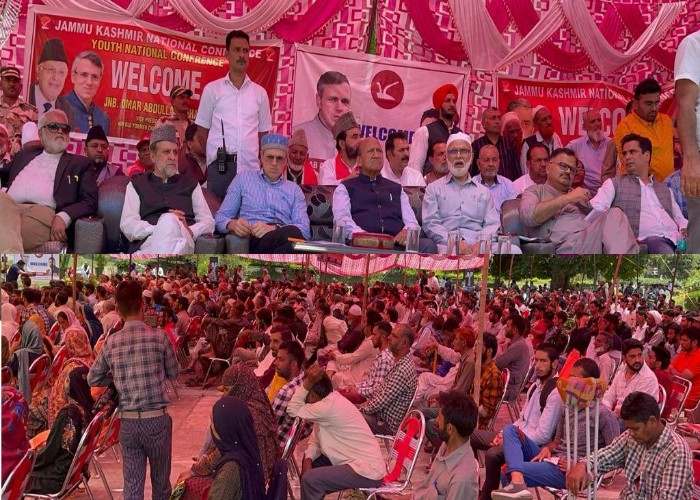 The Jammu and Kashmir National Conference Vice President Omar Abdullah on Saturday questioned the incumbent government on its normalcy claims saying that the situation on ground has vindicated his party’s stand on August 05, 2019 decisions.

Omar said this while addressing a public gathering at Krishan Chander Park Poonch today. He commenced his week-long Pir Panjal tour from today.

Omar said that during his stint as the chief Minister of the J&K state, the funds allocated from the center to the state were judiciously allocated for public infrastructure and utility services in every part of the state without any discrimination. But the good work in terms of infrastructure augmentation, he stated, went unnoticed because of the failure of the party to bang a drum about it. “As a result we lost connection with our people. Our adversaries took advantage of our weakness and wreaked havoc on our state. We had pre-warned our people that our flag is the symbol of our empowerment. People made light of our words of caution. We kept on repeating that if the NC flag weakens, we all will weaken, since this flag hinders them from harming us. People didn’t pay any heed and 2019 happened. Some of us bought. Some of us were misled. We were divided on regional and religious lines but the brunt was born by all of us in equal measures,” he said.

“Today no one can say that after 05 Aug, their lives became any better. Yes, people associated with BJP were given security, contracts, houses and security cover. But a common man out there be it a Hindu, Sikh, Muslim or a Buddhist, if asked whether the decisions benefited them, they won’t be able to answer the question,” he said.

“It was said that Article 370 was an obstruction towards achieving peace. But now when the hindrance in the form of Article has been removed, where is that promised peace? I just came from Srinagar today. People are being killed in their homes. Yesterday only a police cop was killed inside his house. A Kashmiri pandit was also mercilessly killed as well. He was shot dead inside his office. Does this qualify as normalcy? Where is the sense of security?” he said.

“It was told that the August 5 , 2019 decisions will end separatism in Kashmir. But has it? There are still people who want to walk the wrong path and pick up weapons. It was said that regional PAGD parties are a major hurdle in the development of J&K. Where is that development now?”

Earlier he paid obeisance at Peer ki Gali Shrine on Mughal road and prayed for lasting peace in J&K. He was accompanied by party leaders.