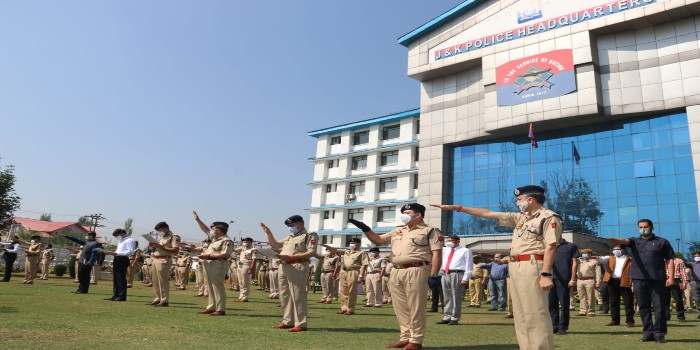 Every individual has to change his/her habits and contribute in keeping the society clean: DGP

ADGP Hqrs. administers oath to the officers to mark the launch of cleanliness

We need to put our collective efforts to keep our surroundings clean and ensure healthy society. This was stated by the Director-General of Police, J&K, Shri Dilbag Singh after the pledge taking ceremony held at Police Headquarters in celebrate the GandhiJayanti. ADGP Headquarters (PHQ), Shri A.G Mir administered Swachhta oath to the police officers,and personnel to mark the launch of cleanliness drive by J&KPolice.

Speaking to the media, the DGP said that every individual has to change his/her habits and contribute in keeping the society clean so that achieving the Clean India Mission becomes a reality. He said that besides at the individual level we have to put our collective efforts to keep our homes, offices, surroundings and neighbourhood clean and work for a healthy society.

Shri Singh said that India as a country is strictly following the roles of non-violence set by Mahatma Gandhi and added that there are elements bent to create violence in one form or another, which is dealt with strictly under law of the land.

The DGP said that it gives me immense pleasure to see the youth of Jammu and Kashmir taking part in different positive activities and achieving their goals at country level services, UT level services, sports and other fields. He said that youth have realized that violence only creates disturbance and because of it Jammu and Kashmir has seen improvement in law and order situation and decline in terror activities.

The DGP said that Jammu and Kashmir Police is making all possible efforts to provide platform to the youth so that they can exhibit their talent and hone their skills. He said that under this initiative J&K Police organized cricket tournament for women in Anantnag, Police Premier League T20 in Srinagar and a mega sports festival is underway in Bandipora. He informed that more sports event are being organised in near future including a sports event in Handwara and added that in Srinagar a cycle race (pedal for peace) for which large number of cyclists have already completed their registration would be held on Sunday. A mega event Jashn-e-Dal in which around 350 water sports athletes are participating will be held shortly.

Meanwhile, cleanliness drives under Swachh Bharat Mission were carried out at all district headquarters, units, and wing headquarters across Jammu and Kashmir in which Police officers and Jawans participated.