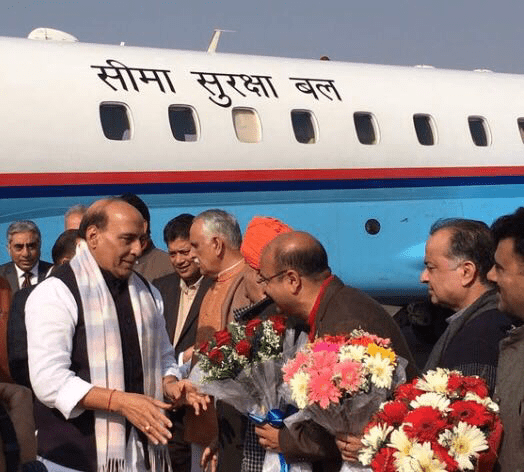 “ We can break Pakistan into 10 pieces, but we   will not,” says Home Minister

Union Home Minister Rajnath Singh  Sunday accused Pakistan of conspiring to break  up India by stirring religious fanaticism  but  made it clear that “ Pakistan should understand it clearly that it won’t succeed in its designs” to split India.

Speaking at a rally in Kathua , about 80 Kms southwest of Jammu, the Union Home Minister said  “ Pakistan has learnt no lessons and it continues to expert terrorism and religious extremism to break  India..”

The  Home Minister  took  on Pakistan by citing the incidents of terrorism in  Jammu and Kashmir , which left soldiers, and civilians dead in the past few months. The venue of his r rally was hardly 5 Kms from border with Pakistan  as the crow flies .

It is for  the first time  that Home Minister has leveled such a charge against Pakistan, though it is well known that  Pakistan had been  using terrorism in Jammu and Kashmir  to cause disaffection .

Rajnath Singh has maintained from the day one that Pakistan was behind the Kashmir troubles that  started afresh  following the killing of  Hizb-ul-Mujahadeen Commander  Burhan Wani on July 8 in  Anantnag district in south Kashmir .

“ Pakistan  will not be allowed to succeed in its designs,” Rajnath Singh said , while citing the  hiring of the ISIS cadre  for causing problems in the country .

He said, if India wanted , it con break Pakistan into 10 pieces,” but we  don’t  want to. We are interested in the stability of Pakistan and it would be better for Islamabad to learn the art of co-existence. But, the “ biggest worry is that Pakistan is neither serious in fighting terrorism nor it  ever has asked for help to combat terrorism. This reflects its double standard.

Accusing  Pakistan of playing of victim of terrorism ad at the same time  running its terror fact0ries is nothing but  an attempt to throw wool  in the eyes of the world.