Parineeti Chopra DELETES her post from social media after getting trolled 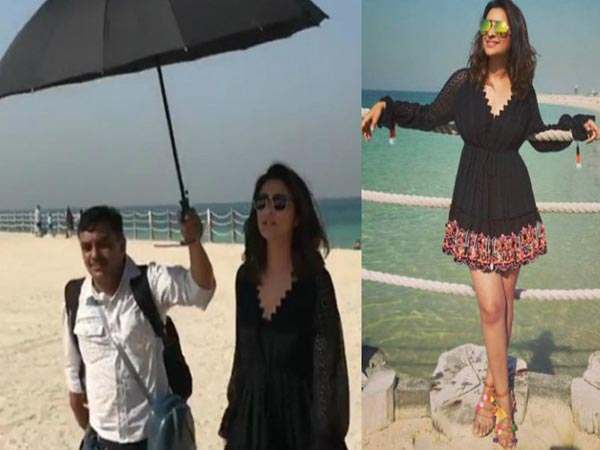 Parineeti Chopra shared a video yesterday on her social media and that drew her a lot of flak.

Parineeti Chopra shared a video yesterday on her social media and that drew her a lot of flak. Why? The actress is currently in Dubai shooting for an ad and she share a video in which her assistant is holding an umbrella for her as she was walking on the beach. He was even holding her bag. And social media lost its cool and trolled her by asking her why would she need somebody else to hold the umbrella for her. She could might as well do it herself. On Twitter, people started trolling her by posting various comments such as: “The umbrella must have been 100 kilos”, “Holding your own umbrella wouldn’t make you any less of a star”. And immediately when she noticed that she was being trolled on social media, she removed the video and shared a post on Facebook this morning saying: It was an exhausting but fab day in Dubai! Now to get some much needed sleep, so I’m all set for tomorrow! And of course the umbrella shall be in my hand :)”

This isn’t the first time when the actress has fallen prey to a controversy. But this is definitely the first time when she has handled it so well. I mean, she could have maybe ignored it but she rather chose to confess (subtly) that it was indeed not right for someone else to hold her umbrella. Don’t you think so, guys? Just a couple of months ago, she was targeted on social media for fat-shaming a friend when she said in a video, “eat less and become thin”.

On the work front, Pari, who didn’t have any releases last year in 2016, is gearing up for Meri Pyaari Bindu which also stars Ayushmann Khurrana in the lead role.