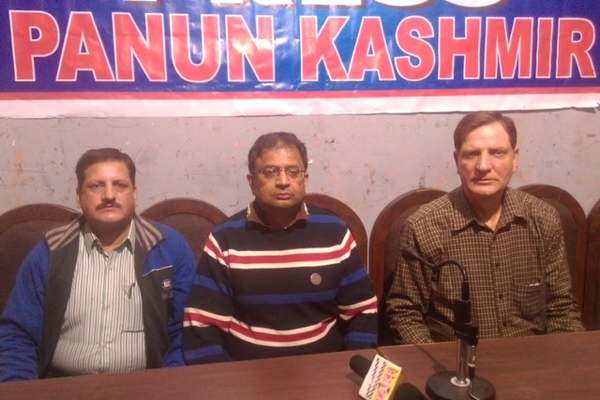 Addressing a press conference, PK chairman Dr. Ajay Chrangoo said that recent statements by National Conference leaders which include Omar Abdullah and Farooq Abdullah is no less anti-national than the politics for which the NC patriarch late Sheikh Mohammad Abdullah was arrested in 1953.

Organisation has made a fervent appeal to central government to immediately intervene and abandon ‘Soft Separatism’ as the basis of democratic government in J&K.

He claimed that the brazen and unambiguous secessionist stance taken by the leadership of National Conference recently is a testimony of this reality.

“Tolerating and perpetuating half way separatism and variants of communalism in Jammu and Kashmir is a strategic suicide being committed in the state. A campaign to wreck the Indian state in J&K from within is going on unhindered”, he alleged.

PK Convenor Agnishekhar said that secessionist and Pro-Pak postures of National Conference has put the entire nation to serious embarrassment in front of the entire world. The embarrassment is further compounded by the position taken by the ruling PDP leadership with regard to the present turmoil in Kashmir as well as Pakistan.

“Agenda of Alliance is being used by all the anti-national forces within the Government and outside it to promote the cause of Pakistan and secessionists in the state”, Agnishekhar said.

It is high time for GoI to realize that soft-separatism only irrigates secession. It breeds alienation. It strangulates national interests. Similarly tolerating and patronizing communalism destroys secular fabric. The religious fascist secessionism in Jammu and Kashmir has grown on the fertile soil created by various variants of Muslim autonomy politics. Defeat of this fascism is critical to the survival of Indian nation.