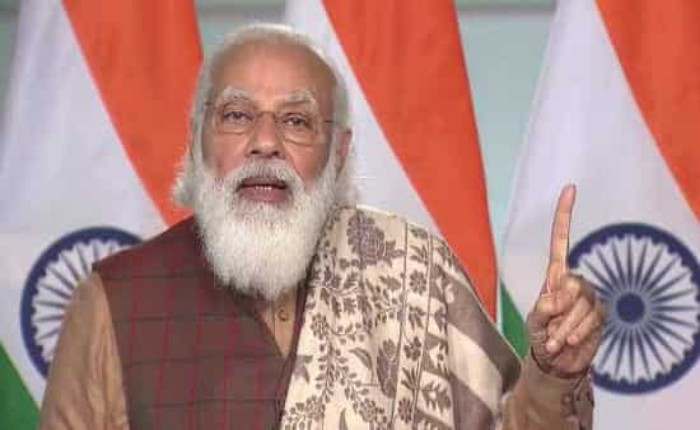 India’s development and self-reliance is dependent on water security and water connectivity : PM

Water testing is being taken up with utmost seriousness: PM

The Prime Minister, Shri Narendra Modi launched the ‘Jal Shakti Abhiyan:Catch the Rain’ campaign on World Water Day i.e today via video conferencing. A Memorandum of Agreement was signed between the Union Minister of Jal Shakti and the Chief Ministers of Madhya Pradesh and Uttar Pradesh to implement the Ken Betwa Link Project, the first project of the National Perspective Plan for interlinking of rivers, in the presence of the Prime Minister. The Prime Minister also interacted with sarpanches and ward panches in Rajasthan, Uttarakhand, Karnataka, Maharashtra and Gujarat.

Speaking on the occasion, the Prime Minister said on International Water Day, a major step has also been taken for the Ken-Betwa Link Canal along with the introduction of the Catch The Rain campaign. He added this agreement is important to realize Atal ji’s dream in the interest of millions of families of Uttar Pradesh and Madhya Pradesh. He said rapid development is not possible without water security and effective water management. He added that the vision of India’s development and India’s self-reliance, is dependent on our water sources and our Water Connectivity.

The Prime Minister noted that the challenge of the water crisis is increasing equally with India’s development. He said it is the responsibility of the present generation of the country to fulfill its responsibility for the generations to come. He asserted that the government has made water governance a priority in its policies and decisions. In the last 6 years, many steps have been taken in this direction. He talked about Pradhan Mantri Krishi Sinchai Yojna, water campaign to every farm – Har Khet ko Paani, ‘Per Drop More Crop’ campaign and NamamiGange Mission, Jal Jeevan Mission or Atal Bhujal Yojana. Work is being undertaken rapidly on all these schemes, he said.

The Prime Minister pointed out that the better India manages rainwater, the lesser the country’s dependence on groundwater. Therefore, success of campaigns like ‘Catch the Rain’ is very important. He noted that both urban and rural areas have been included in the Jal Shakti Abhiyan. He called upon to step up water conservation efforts in the days leading upto Monsoon. Emphasizing the importance of sarpanches and DMs/DCs, The Prime Minister said that the ‘Jal Shapath’ which is being organized all over the country should become everybody’s pledge and second nature. He said when our nature changes with respect to water, nature will also support us.

The Prime Minister noted that apart from rain water harvesting, the management of river water in our country has also been discussed for decades. To save the country from a water crisis, it is now necessary to work rapidly in this direction. He said the Ken-Betwa Link Project is also part of this vision. He lauded both the Government of Uttar Pradesh and Madhya Pradesh for making this project a reality.

The Prime Minister said just 1.5 years ago, just 3.5 crore out of 19 crore rural families in our country, got piped drinking water. He expressed happiness that after the launch of Jal Jeevan Mission, about 4 crore new families have piped drinking water connections in such a short time. He noted that public participation and local governance model are at the core of the Jal Jeevan Mission.