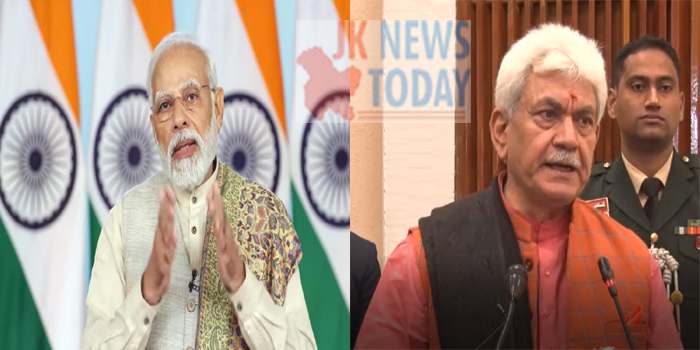 Prime Minister Narendra Modi spoke to the youth of Jammu and Kashmir , minutes before he began his one a month “ Mann ki Baat” for the whole nation , to underscore the challenges and opportunities that have dawned for them in the current decade .
The question is , why PM had to speak to the people of Jammu and Kashmir , prominent among them were the 3,000 youth who have been given letters of appointment for government services , spread across 20 places in the Union Territory ?
It is very critical to analyse PM’s address to J&K youth , because it contains many answers that the people , especially the critics of the government had been asking . Their questions had become sharer after the abrogation of Article 370 in August 2019 . Now simple mention of 2019 defines the change that has taken place in the Union Territory. PM, besides silencing the critics , drew contrasts between the period prior to 2019 and thereafter.

( i) “Now is the time to leave the old challenges behind, and take full advantage of the new possibilities”

( ii)“For a fast pace of development, we have to work with a new approach, with new thinking”

Modi took a special care , rather stressed it three times in his 10-minute long address through video message that how Lieutenant Governor Manoj Sinha ( who had taken over the office in August 2020) has helped transform the atmosphere and brightened up the hopes, confidence of the youth by executing infrastructural development , boosting tourism and fighting corruption and opaqueness in the territory where institutional corruption had eaten away the vitals of institutions.
The event was extraordinary . Prime Minister Modi who has injected new life into the very idea of unity in diversity of the country , took upon himself to tell the people of J&K that they matter to him , and to the country where he governs as PM, cares about them. The idea , he underlined , was that whether they face small or big issues, the Indian nation stands by them, and hailed J&K as crown of India .
Today, 3000 youth were given appointment letters , while 30,000 have got jobs in the UT since 2019 . This was his way of telling that their hopes or the jobs were in the priority list of his agenda . The journey for providing jobs has been undertaken and soon it will pick up momentum not only in the government sector but also in the private sector as infrastructural development and investment have opened new opportunities for the job seekers .

Throwing light on the significance of this decade of the 21st century in the history of Jammu & Kashmir, the Prime Minister said, “Now is the time to leave the old challenges behind, and take full advantage of the new possibilities. I am happy that the youth of Jammu & Kashmir are coming forward in large numbers for the development of their state and the people.” Shri Modi underlined that it is our youth who will write a new story of development in Jammu & Kashmir thereby making the organisation of Rozgar Mela in the state, very special.

Remarking on the continuous development of Jammu & Kashmir by a new, transparent and sensitive governance, the Prime Minister said, “For fast pace of development, we have to work with a new approach, with new thinking.” He informed that about thirty thousand government posts recruitments have been done since 2019, out of which, twenty thousand jobs have been handed out in the last one and a half years. The Prime Minister appreciated the work done by the Lieutenant Governor of Jammu & Kashmir, Shri Manoj Sinha and the state administration. “The mantra of ‘Employment through competence’, is instilling new confidence in the youth of the state”, Shri Modi added.

The Prime Minister highlighted the steps taken by the central government in the last 8 years to promote employment and self-employment and said that the ‘Rozgar Mela’ being organised in different parts of the country from October 22 is a part of that. “Under this campaign”, the Prime Minister said, “more than 10 lakh appointment letters will be given by the central government in the next few months in the first phase.” He informed that the government has expanded the scope of the business environment in the state to boost employment. The Prime Minister further added that the new Industrial Policy and Business Reforms Action Plan has paved the way for Ease of Doing Business which has given a tremendous impetus to investment here. “The pace at which work is being done on development-related projects will transform the entire economy here”, the Prime Minister added. He gave examples of projects that boost connectivity to Kashmir from trains to international flights. The Prime Minister pointed out that international flights from Srinagar to Sharjah have already begun. He further added that farmers here have also benefited a great deal from increased connectivity as it is now easier for the apple farmers of Jammu & Kashmir to send their produce outside the state. The Prime Minister also pointed out that the government is working towards promoting transport through drones.

Throwing light on the record increase in the number of tourists witnessed by Jammu & Kashmir, the Prime Minister noted that the tourism sector in the state received a boost due to the infrastructural developments and increased connectivity. “It is our endeavour that the benefits of government schemes reach every section of society without any discrimination”, the Prime Minister remarked. He said that the government is committed to taking equal benefits of development to all sections and citizens. The Prime Minister also informed that efforts are on to strengthen the health and education infrastructure in Jammu & Kashmir with the opening of 2 new AIIMS, 7 new medical colleges, 2 state cancer institutes and 15 nursing colleges.

Concluding the address, the Prime Minister remarked with assurance that the youth who are getting the appointment letter today will fulfil their responsibilities with full devotion and dedication. “Jammu & Kashmir is the pride of every Indian. Together we have to take Jammu & Kashmir to new heights. We also have a huge goal of a developed India of 2047 and to fulfil it we have to engage in nation-building with strong determination”, the Prime Minister concluded.