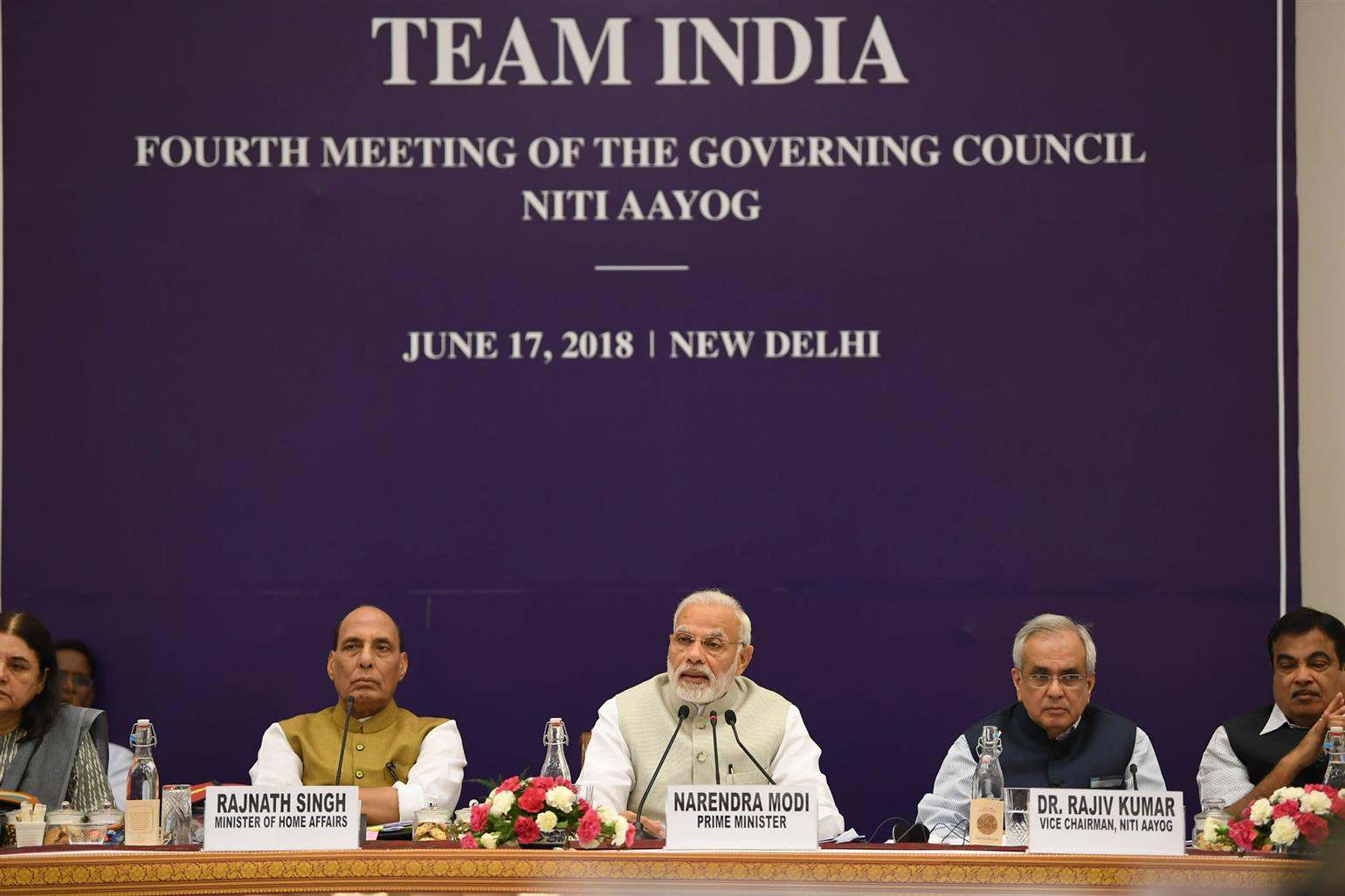 The Prime Minister,  Narendra Modi, today delivered closing remarks at the fourth meeting of the Governing Council of  NITI  Aayog.

Welcoming the constructive discussion and suggestions made by various Chief Ministers, the Prime Minister assured the gathering that these suggestions would be seriously considered in the course of decision-making. He asked NITI Aayog to follow up with the States on the actionable points made by them within three months.

He said that on the lines of the 115 aspirational districts identified by NITI Aayog, States can define their own parameters to identify 20 percent of the total blocks in the State as aspirational blocks.

Speaking on the issue of environment, raised by Chief Ministers, the Prime Minister urged all States to use LED bulbs in their government buildings, official residences and streetlights. He suggested that this could be implemented within a definite timeframe.

He appreciated several other suggestions made by various Chief Ministers, on matters such as water conservation, agriculture, MNREGA etc.

He called upon Chief Ministers of Madhya Pradesh, Bihar, Sikkim, Gujarat, Uttar Pradesh, West Bengal and Andhra Pradesh, to work together to make recommendations on a coordinated policy approach to the two subjects of “agriculture and MNREGA,” including both pre-sowing, and post-harvest phases.

The Prime Minister said that it is vital to identify the “last people in the line” so that benefits of governance can reach him. Similarly, he said, social justice is an important governance objective. He said that these noble causes require close coordination and constant monitoring.

He reiterated the Union Government’s commitment to provide universal coverage of seven key schemes to 45,000 additional villages in 115 Aspirational Districts, by August 15th, 2018.

The Prime Minister said that all villages of the country are now electrified, and under Saubhagya Yojana, 4 crore houses are now being provided with electricity connections. He said rural sanitation coverage has increased from less than 40 percent to about 85 percent in four years. He said that after the implementation of the Jan Dhan Yojana, the entire population of the country will be connected to the banking system. Similarly, he said the Ujjwala Yojana is providing access to cooking gas, and Mission Indradhanush is working towards universal immunization. He said the Union Government is working towards providing housing for all by 2022.

He called upon all Chief Ministers to contribute their efforts towards this objective of 100 percent implementation of schemes for the welfare of the poor.

The Prime Minister said that the implementation of these welfare schemes is also bringing about a behavioural change in lives of people. In this context, he mentioned neem coating of urea, Ujjwala Yojana, Jan Dhan Accounts, and RuPay debit cards. He explained how these schemes are improving the lives of the people.

The Prime Minister said that Swachh Bharat Mission is being discussed around the world. In the last four years, 7.70 crore toilets have been constructed. He called upon all present, to work towards 100 percent sanitation coverage by October 2, 2019, the 150th birth anniversary of  Mahatma Gandhi.

The Prime Minister called for efforts towards water conservation and water management on a war footing.

Speaking on the economy, the Prime Minister said that the world expects India to become a five trillion dollar economy soon. He encouraged States to give fresh ideas to the Finance Commission, for incentivizing outcome-based allocations, and expenditure correction.

He expressed happiness that States are now organising investor summits. He suggested that States should focus on exports. He encouraged States to boost “Ease of Doing Business.” He said NITI Aayog should call a meeting with all States to provide a further impetus to ease of doing business. He said “ease of living” for the common man is also the need of the hour, and States should now take initiatives in this regard.

The Prime Minister said that mining blocks which have been successfully auctioned, should start production at the earliest. He urged States to take steps in this regard. He said District Mineral Foundations will help the poor and the tribals in a big way.

The Prime Minister called for widespread debate and consultations on simultaneous elections for Lok Sabha and Vidhan Sabhas, keeping in view various aspects such as the resulting financial savings and consequent better utilisation of resources.

In conclusion, the Prime Minister thanked the Chief Ministers once again for their suggestions.