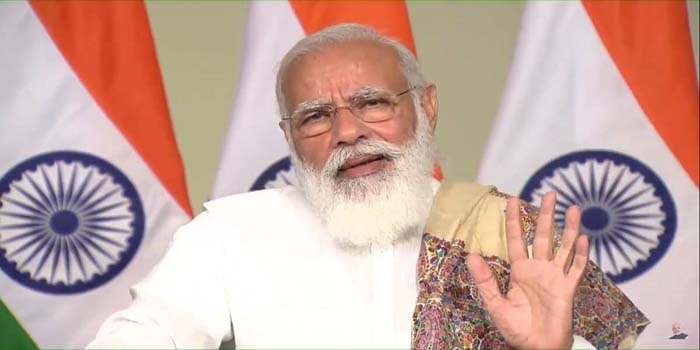 Pakistan is in turmoil , and so is Pakistan occupied Jammu and Kashmir where  a new so-called Prime Minister  Tanveer Ilyas has taken over , but  there is complete lack of decency on the part of  this leader whose only qualification to head the government in the illegally occupied territory of J&K was his money . He is a billionaire. That should  not have concerned us , but the kind of abusive language  he and his colleagues used for Indian Prime Minister  Narendra Modi is most indecent.

Modi is scheduled to visit Jammu and Kashmir any  moment around noon on Sunday ,from where he would address the Panchayats all over the country , marking the celebration of the national Panchayati  Raj Divas  , which is the real grassroots democracy , which has flourished under his leadership. His words and patronage for the grassroots democracy and its percolation to every nook and corner of J&K was executed with extreme deftness by Lieutenant Governor Manoj Sinha .

What has irritated the PoJK men in the government is the visit of PM Modi to J&K’s Palli village where tens of thousands of people have gathered from all corners of the UT to hear him. They have come wearing dresses, usually worn during festivals . It is no less than a big festival for the people as Modi’s arrival was preceded by many development works , including setting up of a solar power plant of 500 Kilowatts and  foundation stone laying and inauguration of Rs. 20,000 crore across the territory .  It is PM’ Modi’s first visit to  J&K since the abrogation of Article 370. In August 2019.

The Indian PM has shown that how things can be transformed in a healthy , peaceful and people-friendly manner when the governance is rooted in  lifting masses out of the quagmire in which they were caught before August 2019 . The PM has initiated and completed several development projects that it has become a major attraction for investors from the country and Gulf countries . There  is a clear rush of  investors to become part of the development and draw benefits out of it while enriching the UT and its people with opportunities of employment and free flow of economy.

Pakistan and PoJK cannot tolerate all this happening on this side of the LoC. They are afraid that the people on their side would revolt as they are neglected in all spheres. They are living in worse conditions than they had inherited when the tribesmen invaded Jammu and Kashmir in 1947. As the neighbouring country and the illegally occupied territory is witnessing one storm after another in political terms and the pain that the tottering economy has inflicted on the people , they are trying to give an outlet to their frustration by using abusive language  against the Indian leaders.

It is high time  that they see the facts as these are . The people of  Jammu and Kashmir are advancing in all  fields because newer opportunities have been created for them, and they have been made part of the progress of the Indian nations. Peace has dawned in Kashmir after more than three decades and the plans of opening new  businesses bringing world class healthcare facilities to their doorsteps, opening new vistas of education and other avenues that all tend to make J&K a model place for  tourists, natives and  investors .

Pak government should  allow  the people in PoJK to breathe , for they have been suffocated by the heavy presence of Pakistani army, terror training camps in and around them, so much that they feel  insecure to step out of their homes. They cannot do their business and move around freely.

It is better for Pakistan government and the self -styled functionaries of PoJK to rectify their fault lines rather than to use abusive language  against the leaders of India, particularly PM Modi whose popularity is unparalleled in the  history of the subcontinent.