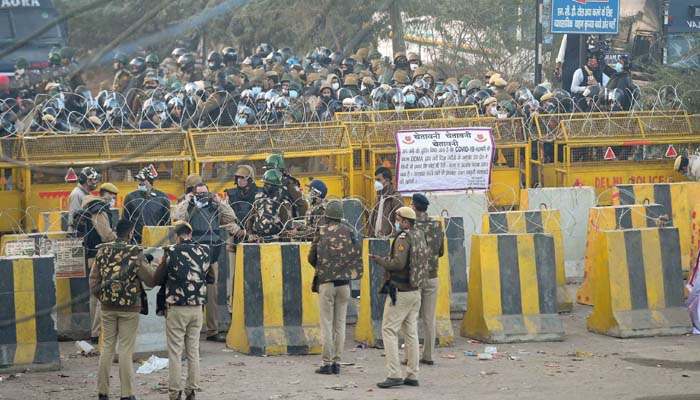 Delhi Police fired tear-gas shells on a section of farmers near Akshardham temple and Sanjay Gandhi Transport Nagar here on Tuesday as they entered Delhi ahead of their planned ‘Kisan Gantantra Parade’.

The agitating farmers, comprising mostly youths, earlier broke through the barricades set up by police near Ghazipur entry point on the Delhi-Uttar Pradesh border and Singhu and Tikri points on Delhi-Haryana border.

AS soon as they reached near the Akshardham intersection on the Delhi-Meerut Highway, police fired tear-gas shells. The farmers then indulged in stone-pelting to break windscreens of passing trucks as well as DTC buses parked on the road to stop them from moving inside Delhi.

A similar situation prevailed at Sanjay Gandhi Transport Nagar as police fired tear- gas shells on farmers who moved in from the Singhu border.

The Delhi Police had permitted the farmers to enter Delhi once the official Republic Day parade was over.

Thousands of farmers from Punjab, Haryana and western Uttar Pradesh have been protesting on the Delhi borders since November 26 last year to demand the repeal of three new central farm laws and ensure legal guarantee for minimum support price for their crops.

Eleven rounds of talks between the farmers and the central government have remained fruitless.